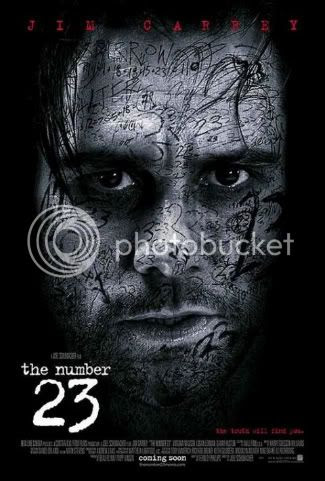 I'm not sure if I've watched The Number 23 or not. I rented the film, put the disc in my DVD player, pressed play, and then looked at my television for 98 minutes. When the film was over, I had indeed taken some notes but all I was really left with was a strange, hollow feeling inside. I'm trying, at this very moment, to talk about the plot but everything you need to know is in the trailer and anything more would spoil the whole thing. Basically, Jim Carrey reads a book, goes crazy, stuff happens, and several of your entertainment needs are met. Or not.

Seriously though, parts of The Number 23 are very well done, beautiful and surreal even, but the rest is corny as shit. What's funny is that the film is cheesy on purpose especially during the hard boiled detective bits. What is less funny (and more pathetic) are the scenes where the film doesn't know it's being cheesy. Like... the rest of the movie. This film just stops being self-aware and becomes totally ridiculous (and not in a The Cable Guy kind of a way either).

The biggest problem for me is how tame The Number 23 is. The movie has madness, murder, and sexual obsession, plus they got the friggin' R rating; so why didn't Schumacher and company just cut loose a little bit? There's some violence, a little bloodshed, and the mystery at the core of the story is pretty cool but the presentation is timid and noncommittal. Oh wait, this is the guy who did 8MM, another pansy ass movie about supposedly dark subject matter!

I think the only reason I watched this is because of Ace Ventura: Pet Detective. I have a crazy soft spot in my heart for Jim Carrey. I will always watch whatever this duder does. Unfortunately for Carrey, his finest hour was in Once Bitten. Or maybe, it was Earth Girls are Easy. Anyway, I can't recommend The Number 23. All the pieces were there for a great thriller but somebody wanted a date movie. No dice.