Wednesday Ramble: I Want To Be Happy 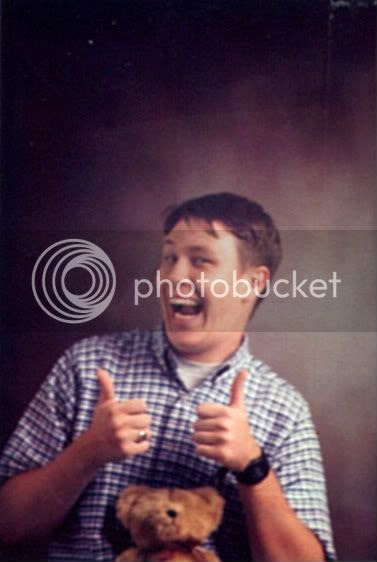 (Look at how miserable I was.)

Hey, it’s Wednesday again and I’m a-gonna ramble at ya. I was just sitting here and trying to think about movies. The first thing came to mind was Nell. That movie is so funny. It’s Jodie Foster talking gibberish for two hours and Liam Neeson has sex with her. At least that’s how I remember it. That’s a pretty sweet deal for all parties involved, right? I don’t know. I think that movie makes me uncomfortable because it’s sad. I mean, it may have been uplifting and all but the whole concept was depressing. I don’t like that. It’s okay when a horror movie makes me depressed but not when a drama does it. When a horror movie provides that gory ennui that I crave, it is usually a bittersweet sensation not unlike eating circus peanuts. Or is that just sickeningly sweet?

How deranged was I when I watched Breaking the Waves… FOUR TIMES!?!?! It wasn’t in a row or anything but what the fuck was I looking for with those repeat viewings? Lars von Trier destroys Emily Watson for 2 and a half hours and I couldn’t look away. When it’s not making you cry, Breaking the Waves is a gorgeous and joyful movie (for approximately 3 minutes of its running time). I did manage to come away from that film with… what? A healthy hatred of the Scottish Highlands? An irrational fear of Stellan Skarsgård? I even gave The VonTrierMeister another shot with Dancer in the Dark. How’s that old saying go? “Fool me once, shame on Danish dudes. Fool me twice, that’s not so nice.”

A few years later, I decided to ruin my life with Requiem for a Dream. Why would anyone watch this shit? I finally broke away from my fascination with drug culture movies. Once you realize that drug movies make drugs look really fun for about an hour or so before people start dropping like flies and/or losing limbs and/or becoming prostitutes. Okay, Trainspotting. I think I watched that maybe 5 times. Why? Why would I ever have wanted to watch that? Hooray for charming and hilarious junkies! Even the poster for that movie gives me the chills now. I'm Ewan MacGregor! There's a baby crawling on my ceiling! Waaaaaaa! Waaaaaa! I stood up and applauded at the end of The Basketball Diaries when the credits rolled. I think being a dumb idiot may have helped with that.

I’m trying to think of some other shit that is just agony for the soul. Recently, I watched This is England and I just wanted to crawl into a hole and die. Oh, these films are poison. Like American History X (which I watched two or three times) or Romper Stomper (which I must have sat through like a dozen times). These are gut-wrenchingly depressing movies. Obviously, the anti-racist message of these movies appeals to me and one has to stare in the face of monsters, especially disturbing and perfectly portrayed ones. But I would get so morose after watching these films. I can only imagine what a friggin’ unendurable bore I used to be (still am). Geez.

Like, I would watch Rumble Fish over and over again. Who does that? Was I ever in a gang? No. Was I ever in a Nazi gang? No. Did I have such a tremendous heroin/cocaine addiction that I could relate to the characters in these movies? No. IFC or Sundance or whatever played Bully and I followed it up with freakin’ Elephant. These are not movies for human beings. They are movies for donkeys named Eeyore. Suddenly, Kids just popped into my head. I watched it with this chick and then we made out afterwards. You see what Portishead can do to a person? Who watches Gummo? I mean, besides me at 22?

For a short time I was obsessed with Arizona Dream. It’s a momentarily fun and quirky flick that gets really dark and bizarre (in a bad way). Of course, this leads me to Vincent Gallo which leads me right into Buffalo ’66. I pretty much overdosed on this one. Why would I watch such a bleak (though momentarily hilarious) film populated with horrible, horrible people? Also, why would I buy the DVD and proceed to watch it over and over again? The only thing I got from this movie is a healthy appreciation of Yes (which some people would argue is unhealthy). Shit. What the fuck? I can't even imagine being in the frame of mind where I would rent Slacker, Floundering, and House of Yes. Sure I watched Krzysztof Kieślowski that one time and it did get me laid but don't you try that at home, kids. Hey I know what would be fun, let's watch A Woman Under the Influence. That's a happy movie!

None of these are terrible movies, really. I mean, cinema people always harp on the negative side so of course wildly depressing stuff is going to be somebody’s classic. Plus, for some people these are going to be classics; the films that got them through their awkward teenage (or awkward early to mid 20s) years. I guess they did for me. Part of me growing up cinematically was watching things that made me want to kill myself. Nowadays, I watch horror movies. Some of them are dark and depressing like Martyrs but most horror flicks are uplifting like Crazy Lips. I went from one form of depravity to another and somehow I'm more stable. Weird, huh?

So I guess what this ramble is really about is this: if I had to live my life over again (well, at least from 18 to 26), I would put down that VHS of Leaving Las Vegas and just watch Tommy Boy again. "Shut up, Richard." Now leave me alone, I needs my emo: