Night of the Devils 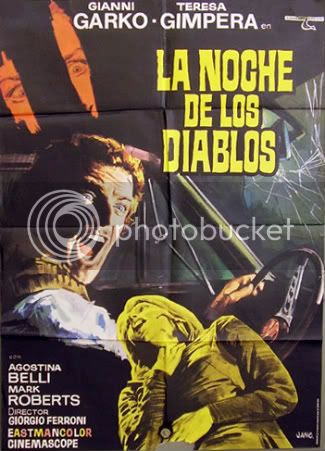 A man suffering from amnesia (played by Gianni Garko) staggers out of the woods, injured, and catatonic. He is brought to a hospital where a doctor (Umberto Raho) runs tests which determine the man has suffered a terrible shock that has reduced him to this agitated and paranoid state. The only person who can identify this man is Sdenka (Agostina Belli), a lovely young woman who claims she met the patient a just few days ago. She identifies him as Nicola, a business man from Italy, but then disappears after the very sight of her drives Nicola into a frenzy.

The film then flashes back to a few days before to the events that drove Nicola mad. While purchasing lumber for his company, Nicola’s car breaks down in the middle of nowhere and he seeks help from a family returning from a funeral and living in a nearly abandoned village in the woods. Jovan (played by Roberto Maldera) agrees to help Nicola but it must be in the morning because there is said to be a blood-drinking witch who prowls around at night. This turns out to be true when the patriarch Gorca (Bill Vanders) returns from attempting to kill the witch but is now a vampire himself. As each member of the family falls prey to vampiric forces, Nicola tries to rescue the lovely Sdenka, the lovely daughter of Gorca with whom he has fallen in love with.

For some bizarre reason, my library had an old bootleg of Night of the Devils in its VHS collection. I checked it out and tried to watch this murky fucking mess crawling across my TV. It was painfully obvious (mainly because I got a migraine from trying to watch it) that there was a very special film there buried under the tape deterioration, tracking problems, and sludge that happens when you make a copy of a copy of a copy of a copy, etc. I knew that out there somewhere, there had to be a watchable version floating around. I took a chance on Euro Trash Cinema and got lucky.

Night of the Devils kicks in with one of the most attention-grabbing opening scenes in Italian horror. Gianni Garko (or Sartana to you spaghetti western types) comes stumbling out of the woods into a clearing. He passes out near a stream and wakes up in a hospital where he is being examined by doctors. During his tests, we see into his mind where he is tormented by horrific visions of rotting corpses, a woman’s face getting shot off, ghoulish figures ripping the flesh from a naked woman’s body. This sequence is spell-binding. Its cheesy for sure but it is impossible not to wonder just what happened to this guy. Curiosity = piqued? You know it.

Director Giorgio Feroni (Mill of the Stone Women) remakes the 'Wurdulak' segment of Mario Bava’s Black Sabbath but makes it his own by amping up the sex, the gore, and the cackling madness of the vampires. The soundtrack by Giorgio Gaslini (So Sweet, So Dead) is great with its haunting vocal pieces and tense and minimal freakouts. Spanish cinematographer, Manuel Berenguer, keeps things nice and claustrophobic. While the countryside is nice, it is never pretty. Instead, the entire film is very somber and cast in shadows (without being overly dark). When there is a brightly lit scene, it screams danger and madness. If I have to find faults with this flick then it would be that the pacing is a little slow and the gore effects are looking a bit gamy.

Oh, this cast is great. Gianni Garko is always good. The lovely Agostina Belli of Holocaust 2000 and Scream of the Demon Lover is excellent as the sweet (or possibly evil) Sdenka. You might remember Roberto Maldera from The Night Evelyn Came Out of the Grave where he played the very unlucky groundskeeper. The luscious and hypnotic Teresa Gimpera of Crypt of the Living Dead gets ripped to shreds in this one (and it’s not by the critics). The always dependable Umberto Raho who usually plays police inspectors gets to flash his skillz by playing a doctor! And then there’s Maria Monti as 'The Witch'. This is a truly eerie performance from an underused actress who had a small role in What Have You Done to Solange? I also have to mention young Cinzia De Carolis who grew up and played the freaky jailbait who tries to seduce John Saxon in Cannibal Apocalypse.

Night of the Devils is one of those forgotten masterpieces and a genuinely gore-soaked relic. This is the kind of cinema that drives me nerdily on. This film proves that if you think you’ve seen every last scrap of Italian junk, chances are there is one more title out there you need to see. Creepy, sleazy, bloody, melodramatic, nasty, and, as an added bonus: mind-fucky! The somber tone never lets up for a second and you just know that this ain’t gonna end well for our deranged hero. This is good stuff, y'all.

Eurotrash Cinema’s copy of Night of the Devils is pretty rough. It is widescreen but is faded as hell and the Dutch subtitles are distracting. The print is scratched up and a little jumpy at times (probably due to its VHS source). The English mono audio is passable but there’s lots of hiss and pops. That being said, I have to applaud ETC for rescuing this very obscure horror film from oblivion. To my knowledge, there isn't a special restored edition of Night of the Devils on its way in the near future. I actually had a murkier version of this film from a different company and it was unwatchable. If you are as desperate as I was to see this movie, then give the Euro Trash Cinema version a chance. 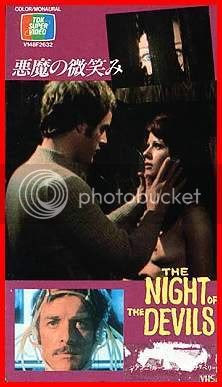 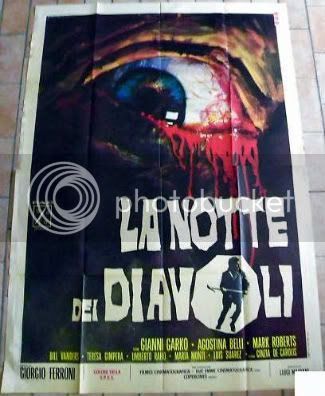