Last week I talked about how I almost got to see Robocop. Here's the real deal.

Now where was I? Oh yeah. So I'm sitting there, all alone in the dark, watching Robocop. My short 11 years on the planet suddenly meant nothing. This was the apex of my life and I knew it. At the first sign of gore (a hapless executive getting shredded by ED-209), the realization that my disastrous swimming lesson freakout that prevented me from seeing the best film ever made WITH MY MOTHER was a blessing in disguise. I knew that my mom would have flipped out and I wouldn't see Robocop until I went off to college. (If only my Space Mountain spaz-out had some secret happy outcome. (All that really accomplished was making my parents ashamed to call me their son. (But that's another story.)))

And little did I know at the time, this was the cut version:

When the film was over, my mind was swarming. I couldn't calm down. You'd think that I had snorted about 50 lines from that coke factory Robocop busted. I went down to the arcade with a fistful of quarters and played Rolling Thunder until I was broke. Once my parents were done with their conferences for the day, I chewed their ears off about Robocop. I couldn't shut up about it. However, I was very careful not to mention anything about people getting shot in the privates, their hands blown off, stabbed in the jugular, shot in the kneecaps, etc. I did mention the toxic waste bit. How could I resist grossing my mom out by detailing a scene where a man is dipped in toxic chemicals and then explodes when he gets hit by a car? I just couldn't. 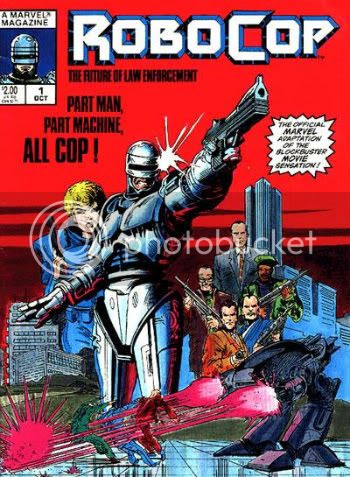 When you just couldn't enough Robocop (and believe me I just couldn't), then you just had to check out Marvel's comic adaptation of the film. It is seriously one of the worst fucking comic books ever made. Obviously, all of the cursing is absent, as is the extreme gore. The worst part, of course, is the terrible artwork. Certain scenes from the film are drawn pretty good, the rest of it is just awkward and lackluster bordering on pitiable. This lame garbage put me off so much that I didn't even know there was an actual Robocop comic book with its own storyline. I'm assuming it sucked too.

The following Christmas, after I thought I had opened all of my presents, I noticed that there was one for me left unopened. Judging by the shape and the weight, it was definitely a VHS tape. When I peeled off that paper, you could have knocked me over with a feather. It was Robocop! I owned very few movies in those days and my parents (unless they watched it without my knowledge) had just given me the most ultraviolent thing I'd ever seen.

I think I've watched Robocop somewhere between 20 or 25 times thanks mostly to that tape. This was one of the very rare films that I could actually watch twice in a row. I prided myself on knowing every line of dialogue by heart. (Yeah, that's one useless talent I no longer possess.) Unlike the comic book apaptation, I found the network TV version quite amusing with all the curse words replaced and jarring editing to cover up the violence, so I usually watched it when it was on. Obsessive behavior is so much easier when you're a kid. No one's keeping track of your free time. 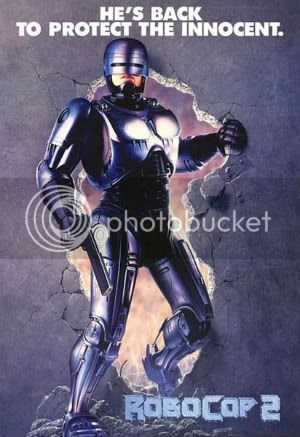 When the trailers for Robocop 2 started popping up on TV, I couldn't contain my excitement. I actually started writing my own novelization of what I thought Robocop 2 was going to be about just based on what I gleaned off the trailers. I don't remember how far I got or what the exact plot was of my little fan fiction but I was 14 so I imagine it was pretty friggin' dumb and hilarious. Or maybe just pathetic.

I have a vague memory of my mom taking me to the theater to see Robocop 2. I know she just bought me a ticket and dropped me off. I'm glad she didn't come with me to see the film because there were several things about this awesome sequel that would have probably caused her to bolt with me in tow. For instance, there's that kid, Hob (played by Gabriel Damon), a drug pushing, murderous psychopath, who was my freakin' hero. My mom would have noticed the obvious glee and admiration on my face during scenes of him blowing people away and cursing up a storm and it all would have been over.

Even then I knew the sequel wasn't as good as the original but I was more than pleased. The things that I loved about the first film were even more pronounced here. The urban decay, fake commercials and newscasts, the cartoonish levels of violence, etc. It was all there. A bad guy like Cain (played by the terrifying Tom Noonan) made me forget all about Clarence Boddicker. Of course. Seeing Dan O'Herlihy in a hot tub... that wasn't so good. 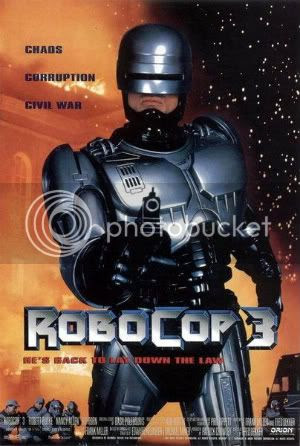 So aparently, the Robocop phenomenon continued without me. When I heard they were making Robocop 3, I had only two rules: it had to be rated R and it had to have Peter Weller. Well, they screwed that up and did neither of those things. No disrespect to Robert John Burke but dude ain't Robocop. I will never accept him. Of course, the PG-13 was the final nail in the coffin of my interest. I was a dickish 16 year old at this point so there was no way I was going to waste my precious (yeah right) time on this crap.

Then there was a TV series which I didn't even know about until the toys were available for purchase at Kay Bee Toys at the University Mall. This was in 2002 and the show had been off the air for 8 years. Another strange thing: Kay Bee never had the Robocop figure. It was always the supporting characters. Had they had at least one friggin' Robocop, I would have bought the dang thing. But wait, there's more. A mini-series? A Japanese rip-off? A slew of videogames? (No wait, that I remember.) A Frank Miller comic book? And now, word on the street is that a 3D Robocop might be in the works? I'd buy that for a dollar! You knew that was coming, didn't you?

I did pick up the DVD back in 2001 and had a tearful reunion with my Robobro. It was still an exhilarating film and I remembered so much dialogue from it that I annoyed everyone in the room (nothing new there) by telegraphing the best parts. But I haven't watched it since. I guess it's time to get reaquainted with an old friend. I probably need to get down with this unrated cut I keep hearing about.