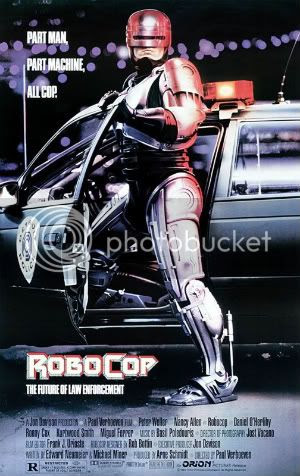 Robocop and Bladerunner are very similar films and I am going to make a list of how they are similar. 1) They both take place in a city. 2) They both take place in the future. Those are the only two I can think of right now. Well, that didn’t pan out. I guess I’ll just blab on and on about why Robocop is still one of my favorite movies of all time since it was released nearly 23 years ago. But first, I have to talk about how I almost got to see it in theaters.

The summer that Robocop came out, I was taking swimming lessons. I was nine years old and I did not yet know how to swim. It was for that reason (and partly because of Jaws) that I was scared of the deep end of the pool. However, unlike my breakdancing lessons from the previous summer, I was taking to swimming quite well. It was only a mildly humiliating experience. I was one of the older kids there (if not the oldest) so the learning process actually made me feel dumb because I should have already been swimming like a dang fish. So yeah, my mom promised me that she would take me to see Robocop if I passed the class.

Robocop was the hottest movie that summer. My friends had already seen it and had told me that it eclipsed the awesomeness of Transformers: The Movie. This was essential viewing and the promise of seeing it made me all the more determined to learn how to swim. On the last day of class, my mom stayed on the benches, watching, ready to pick me up, take me to lunch, and then whisk me off to the movie theater. My tenth birthday was just a few days away, I was going to see Robocop, and some 7 year old kid was playing with his snot in the pool. I was having the time of my life. That’s when the swimming instructor announced that our final test was to jump off the diving board into the deep end of the pool.

It was like a slap in the face. It dawned on me that in order to pass the class and get to see the movie event of the century, I had to risk drowning. Like, really drowning. I watched other kids (some of which were half my age) jump off the diving board and into the deep end. Each time they sank like a stone and my stomach seized up. Then they rose to the surface laughing and confidently swam to either the edge or the instructor waiting in case something went wrong. I was going to fucking die. I just knew it.

I immediately got out of the pool and went over to my mom and tried to talk her out of making me finish the class. She was not amused. I begged her not to make me jump into the deep end and explained that I knew how to swim so there was no reason for such a pointless act. She told me that if I didn’t jump off that diving board, she wouldn’t take me to see Robocop. I lost it. I wasn’t really a tantrum kind of a kid at this point. I never swung my arms around, banged my head on the ground, or squealed like a beast. I just shook and wept. I’m sure it looked like my dog had just died or something. I was in one of those impossible quandaries. I knew that crying wasn’t going to get me what I wanted. I knew that I was going to have to do the scary thing I had to do. I knew that by crying, I was making things worse but I couldn’t stop.

After five (or ten or twenty) failed attempts to get up the courage to jump into the deep end, I finally did it. Now granted, I was crying when I jumped in and I had the instructor catch me when I hit the water. And I came up choking and flailing like a drowning cat. Yet I rose from the pool triumphant and went over to my mother who was just staring at me. Smiling (and strangely proud), I said something to the effect of ‘see, I knew I could do it, now take me to Robocop’. She calmly said, ‘no’ and we left the pool. I don’t remember if we spoke on the way home or not. I probably tried to reason with her and failed. I didn’t get to see Robocop that day and I’m glad. I had proven myself to be a sniveling wussy coward and God only knows how I would have turned out if my mom had given in. So Robocop came and went. It was in theaters for what seemed like forever and I didn’t even try to convince my mom again to take me to see it. I had failed in my quest to grow up even a little bit that summer.

The following summer, my parents took me along to the Tupperware convention in Orlando, Florida. It was a week’s stay in a nice hotel (probably the Marriot) with a game room and a swimming pool (uh oh). The best part about the trip was that my parents would be in meetings all day and I would be free to roam around the place, read, draw, and waste some cash at the arcade. It was late afternoon when we checked in, hauled our bags upstairs, and went up to our room. Something caught my eye immediately: there was this little cardboard promotional thingie on top of the cable box showing the Pay Per View movies the hotel offered. At the top of the list was, that’s right, friggin’ Robocop. I danced a jig and showed my mom the good news. For a split second, I could see that she was remembering last summer’s Roboswimming misadventure. But she just smiled at my enthusiasm and said that I could watch it the next day while she and my dad were at their meetings.

The wait was agony. I had already waited a year to watch Robocop and now I had to wait one more night? Shit. I could barely sleep a wink that night. Of course, I had already wasted a third of my week’s videogame budget that evening (they had Space Harrier!) so my mind was already racing. But the promise of the single greatest film of all time waiting for me in the morning made it almost impossible to sleep. At six in the morning, I got up with my parents. I tried to help them get ready to pass the time. The next showing of Robocop was at 8:00am. My dad quickly re-explained how Pay Per View movies worked. Once I was done with the movie, I had to change the channel. If I left it on all day, we would have to pay an exorbitant fee when we checked out. Duh, like I didn't already know that. After a quick breakfast with my folks, they went on their way and I was finally alone. I shut the curtains, plunging the room in darkness, and watched some morning cartoons while keeping an eye on the clock. When it was finally time, I turned to the Pay Per View channel and there it was: ROBO FUCKIN’ COP!

To be continued next week...