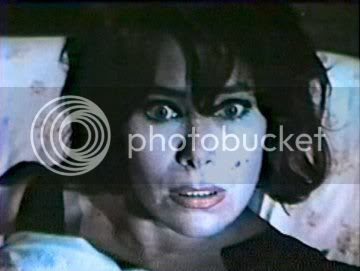 A group of tourists travel to an island to see its exotic botanicals. There they meet Baron von Weser (played by Cameron Mitchell), a reclusive scientist studying rare horticulture and experimenting with crossbreeding dangerous varieties of plants. One of the Baron’s creations is draining the blood of human beings (through a small hole in their cheek) and the tourists are dying one by one.

Mel Welles, the genius behind the inexplicably amazing Lady Frankenstein directs this junky little number. The lame and predictable dialogue is goofily dubbed and the storyline is totally generic monster movie pseudoscientific hokum. The worst scene in the movie features all the characters shouting about who or what is to blame for the recent killings. Most importantly however, Maneater of Hydra has a beautiful mansion, an exotic locale and a windstorm that never seems to let up.

Our cast of characters is headed up by total spazzoid Cameron Mitchell (a man who inspires great love and hatred in me) of Blood and Black Lace and Minnesota Clay. Cora Robertson (Czechoslovakian actress Kai Fischer) is a hot bag of cleavage in heat. The lovely and sweet Beth is played by Elisa Montés who would show up in Jess Franco’s 99 women. The most irritating character is the shrill and terrible Myrtle Callihan who shrieks and complains about everything. Trust me on this one: she should have been the first to die.

While Maneater of Hydra is strictly non-essential viewing (thanks mostly to some dull bits), it’s still a good time for a very boring Sunday afternoon (or a Saturday with a head cold (which is how I viewed it)). The way the creature sucks blood from people is pretty disgusting and the animated opening titles are just splendid. Plus, the climax is quite outrageous and very bloody.

“I’m sorry but you were about to touch my giant… gardenias.” 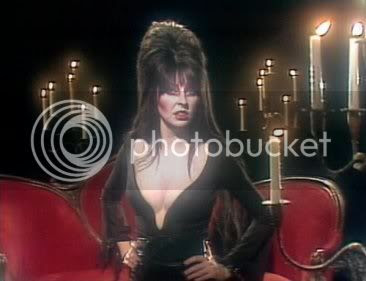 While this film’s sketchy European origins (both Spain and Germany) are a big draw for me, I just had to get my hands on this DVD due to the presence of Elvira, Mistress of the Dark. The presentation on this disc contains Elvira’s original hecklings from her “Movie Macabre” show. I consider it nothing short of a miracle that Shout! Factory DVD has released these amazing pieces of cheesy nostalgia. Even though Maneater of Hydra looks like garbage (full frame and full of scratches), I can’t see how restoration would help this horror dud in any way. Be sure to get the double feature with the excellent Spanish film The House that Screamed on the other disc.
Posted by Richard of DM at 7:52 AM