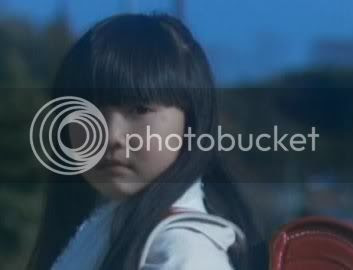 Two losers, Mitsuru and Maki played by (Tetsuji Tamayama and Asami Mizukawa) kidnap a little girl and take her to an abandoned school. When Maki calls the parents demanding the ransom money, they tell her that their daughter has been dead for over a year. But that’s only the beginning, as the school seems to be inhabited by a very angry and murderous spirit.

Pray is a weird one. The plot seems too simple at first but a couple of plot twists come along to help keep things popping. A generic story (even with the surprises) and leisurely pace don’t help this film at all but it is just strange enough to be interesting. I’m glad the reviews I’d read beforehand were so awful. They inspired me to seek it out. (Reverse recommendations, y’all!)

While you won’t have to strain your eyes, most of Pray is pretty murky, filmed in a dark location at night with mostly drab tones. It’s almost a relief whenever someone flicks the dang lights on. Overacting from some of the cast and a schmaltzy passage near the end aren’t going to win any points with anyone. But on the plus side, the ghostly action is fun and the soundtrack is eerie and suspenseful with some beautiful passages.