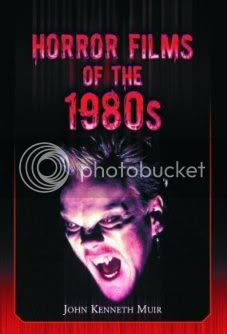 John Kenneth Muir has given horror nerds a reason to breakdance now and forever. After his astounding two volume Horror Films of the 1970s, comes (what else) Horror Films of the 1980s. This 800+ page behemoth is a superb look at the decadent decade of teased hair and bloody machetes. Think you've seen everything from the 80s? Chances are you will make a pages-long list of things you forgot about or have never heard of before.

My biggest complaint about the book is a snarky review of Lucio Fulci's The Beyond. The reviewer compares people calling The Beyond a masterpiece with the French loving Jerry Lewis. Thanks a bunch, you clever fucking dick. The Beyond doesn't have a cohesive story? No way! I hadn't noticed. If I gave a double god damn about plot and storyline, I wouldn't be a horror movie fan. Shit, even The Hills Have Eyes Part II, the worst sequel of all time, gets a better score. Seriously?

Am I criticizing these reviews simply because of my own personal taste in horror films? Yes, of course I am. I'm a geek and I will always go there. The book makes tons of excuses for Christine (a terrible film based on an awful book) but the reviewer claims that the audience doesn't sympathize with Liza (the heroine in The Beyond) because she's "too weird". Um well, actually we sympathize with her because she's played by Catriona MacColl, duder!

Basically, anything remotely negative any reviewer says about The Beyond is true. It doesn't make one lick of sense but that's one of the things that makes it so dang awesome. The characters are thinly written and to make up for it, they behave inexplicably. How is that not great? Fulci fans (and Italian horror fans in general) cannot be reasoned with. We can only be ridiculed but we'll be too busy with mopping up the guts to notice. That's just how we roll. I just thought this particular review was written with a big middle finger wagging in our faces but ANYWAY...

From the fascinating introduction to the useful appendixes and all the excellent reviews in-between, Horror Films of the 1980s is an amazing resource and fun as hell to read. (It also gives me a chance to have imaginary arguments with Muir and the book's contributors.) Very highly recommended.
Posted by Richard of DM at 8:32 AM