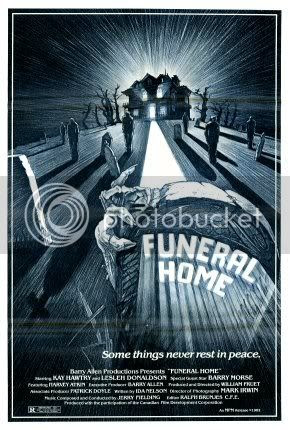 Heather (played by Lesleh Donaldson) arrives by bus to help her grandmother, Maude Chalmers (Kay Hawtrey), convert the family funeral home into a bed and breakfast. Sounds like a pretty fantastic idea to me. Miss Chalmers is a God-fearing woman but ever since the disappearance of her mortician husband, she’s been just a tad strange. As some of the guests start to disappear, Heather begins to suspect that something terrible may be going on.

Canadian William Fruet, the man behind all kinds of wacky movies such as Spasms, Death Weekend and Blue Monkey, directs this simple but atmospheric cheapie that is actually pretty decent. The story is very simple (it should only take you about 4 and a half seconds to figure out) but has lots of holes. For instance, why does this little shitbox town have so many tourists anyway?

I can’t help but love the simple, easy-going and all American- um... okay, Canadian folks in this movie. Heather will steal your heart because she is just so darn adorable (especially in that frumpy one piece she wears to the rock quarry (where all the kids go)). There’s a hapless (yet intermittently brilliant) rookie cop named Joe (Alf Humphreys) who knows that there is some hinky stuff going on but just can’t seem to put the clues together.

When all is said and done, Funeral Home is an okay way to kill an hour and a half. The camerawork is excellent and the film has an undeniably unsettling atmosphere. There isn’t much blood but there are enough of those early 80s short shorts to make any viewer nauseous. The climax is very tense even though we’ve known what the twist (I hesitate calling it that) was going to be all along.
Posted by Richard of DM at 7:19 AM