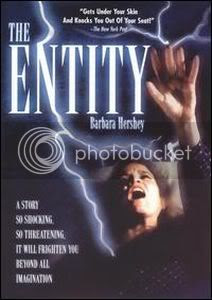 I'm sick. It's pretty much a really bad head cold but there are moments where I would swear that it is terminal. Before I crawl back into bed, I thought I would post something about my young exposure to The Entity. I thought about posting this to the amazing Kindertrauma but it's really nothing more than a fleeting memory.

In case you don't know, The Entity is a harrowing supernatural thriller where Barbara Hershey's character is repeatedly raped and physically beaten by an invisible spirit. All I remember about the experience is sitting around with my folks and watching this painful and disconcerting film and feeling more than a little embarrassed. I don't think I could have been more than 8 years old and all I really learned was that ghosts sure as shit don't know how to treat a lady.

SPOILER: Something I don't remember about the film is that the ghost is never really defeated. She moves away and the attacks become less and less frequent and severe. That's kind of anticlimactic and um... disturbing.
Posted by Richard of DM at 9:57 AM