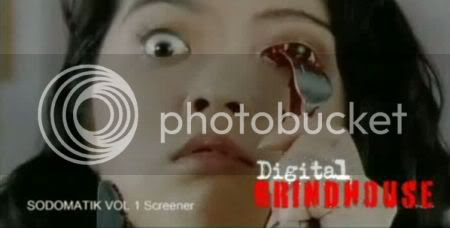 Sodomatik Extreme Gore Mixtape Volume 1 begins with a dying nun. She’s been stabbed multiple times and she eventually collapses. And we’re off. This collection of gore footage culls clips from Suicide Club to Evil Ed to Death Smiles at Murder to New York Ripper to Nekromantik 2 to the infamous Guinea Pig films, just to name very few. I guarantee you will see some friggin’ insane acts of brutality on this one. There were even times when I really, really wanted to look away. The “best parts” of Douglas Buck’s short film Cutting Moments are so brutal and so truly heart and gut wrenching (even out of context) that I felt my happy thoughts die a very slow death.

This is not for the faint of heart and nor is it for the squeamish. I’ve heard of people making gore compilations before but it never occurred to me to watch one or make one myself. Don’t get me wrong, I get a roller coaster charge from a good gore scene but I still love the rest of the movie surrounding the “money shot”. Atmosphere and weirdness still ride highest on my list of essential parts to a viewing experience and this gore compilation sacrifices those for visceral thrills.

Even though it sounds like I’m wussing out here, I did have a good time with this volume of ghastly and very wet delights. My only complaint is that the first half hour or so has a very interesting* selection of music while the last two thirds sticks with the soundtracks of the original films. I would have preferred to keep the music video vibe. Eventually, I just turned the sound off and listened to Carcass’s Symphonies of Sickness and Entombed’s Clandestine. Once again, death metal saves the day.

*Where else are you going to hear The Postal Service while someone’s head is being bashed into a bloody pulp?

Get more info right here.
Posted by Richard of DM at 10:14 PM