I’m sure a lot of you out there are feeling like the spring and summer of 2020 have been going supernaturally slow. And then all of a sudden, it’s the end of September! I am relieved that October is just around the corner but I’m also very irritated with myself for not having planned this Asian horror month better. I watched a huge number of movies but didn’t give myself enough time to write the damn reviews! Bad blogger! I let other projects get in the way all summer and then as soon as September hit, my wife and I started bingeing Halloween specials. I swear, you’d think that blogging was a dying medium.

So instead of being smart, I’m sitting here tonight blasting through quick reviews like an idiot. The most encouraging part of The Invasian series so far is that there is always another month’s worth of movies I could’ve watched and written about. And then another month and another, etc. So, I hope it goes without saying that I will return to this subject again, my friends. I’m like the moth in this song. Just like that. Thanks for hanging out with me and I hope to see you around these parts again soon. 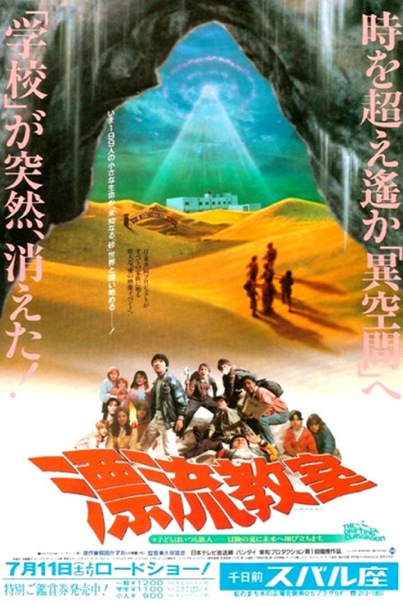 On a seemingly normal school day, disaster strikes when a school building disappears. The students and teachers inside are transported to another place and time, perhaps even another dimension. This is easily one of the most outrageous films I’ve ever seen. Horror fans will know director Ôbayashi for his cult favorite Hausu (1977) and this film does not disappoint in the utter weirdness department. Based on the manga by Kazuo Umezu, Ôbayashi revels in the outlandish plot of the source material. Adding to the chaos is that much of the cast is made up of non-professional (or just plain awful) American actors and the Japanese cast primarily speaks English. The Drifting Classroom feels like if Wes Anderson was kidnapped as a young man in the 1980s, force fed hallucinogenic drugs, and then directed a film at gunpoint without being allowed to see the script. It’s loud, it’s outrageous, and it’s several varieties of wacko. I’ve truly never seen anything like The Drifting Classroom. 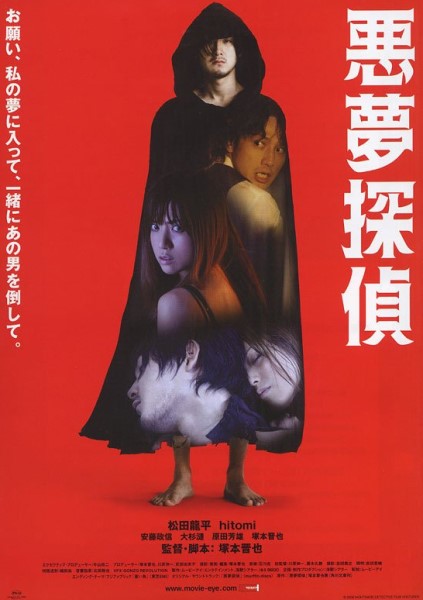 A series of unsolvable murders inspires a desperate detective (Hitomi) to call in a man known as Kyoichi Kagenuma (Ryûhei Matsuda), the nightmare detective. His ability to tap into other people’s nightmares will come in handy on the case but I don’t dare say anything more because I don’t want to spoil it for you. This hyper-bizarre abstract horror film from Tsukamoto, one of the strangest directors to come out of Japan, takes a great premise and delivers it completely sideways. You like your existential dread injected with a very unusual sense of humor? Then this is a film for you. My only gripe about Nightmare Detective is that its madcap energy flags near the end but its worth hanging with it to the end. Tsukamoto followed up this with a sequel in 2008 which, if I recall correctly, is equally weird to the original. 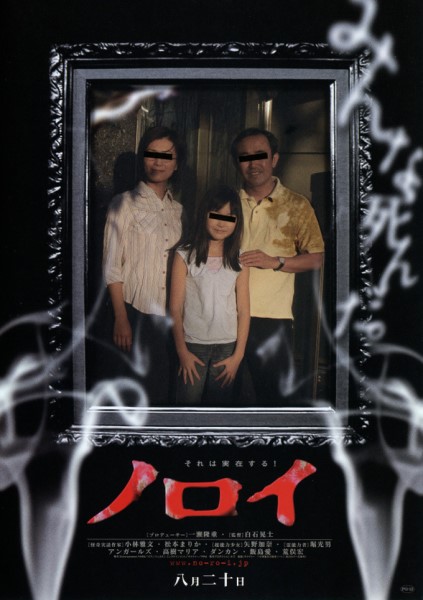 Masafumi Kobayashi (Jin Muraki) is a documentary filmmaker obsessed with capturing proof of the supernatural on camera. He gets more than he bargained for when one of the urban legends he set out to capture turns out to be very real and very deadly. Over the years, I’ve grown extremely weary of found footage films and a big part of why I avoided Noroi for so long was its nearly two-hour running time. But this epic found footage film is something of a masterpiece. It’s creepy from damn near the very beginning and is never boring. Highly recommended. While not nearly as frightening as this, check out director Shiraishi’s 2007 horror film, Carved: The Slit-Mouthed Woman. 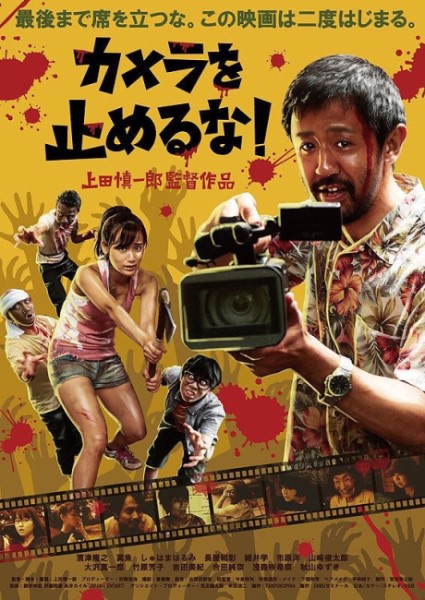 A film crew making a zombie film runs into some problems. Yep, that’s all you should know about this film before going into it. Just be patient with it, my friends. After being buried under 3 or 4 tons of hype for this film, I finally sat down and watched One Cut of the Dead. I have to say, it exceeded and defied my expectations. I'm sure that tons of folks who are way better writers than me will have a lot to say about this film. I'll just say this, when all was said and done, I had tears in my eyes. If you still haven't seen this, do it. Don't look into the details and/or try to forget what you've already heard when you give it a go. This one really is that good.

After exposing a child prostitution scandal, a reporter (Ji-Won Ha) begins to receive creepy and threatening phone calls on her cell phone. She tries fleeing the city to stay at her friend’s house, but the spooky incidents follow her. Phone takes a generic ghost plot, a hilariously overwrought thriller story, random Christmas sequences, “Moonlight Sonata”, and one of the creepiest little kids ever, and squishes them into a huge hit for director Ahn. I like Phone but it doesn’t hold a candle to Takashi Miike’s One Missed Call (released the following year), which is impossible not to think about when you’re watching this movie. I like Phone well enough but it’s unfortunately a bit disposable. I remember enjoying this director follow-up ghost movie Ouija Board AKA Witch Board (2004) much more.

Just seconds before a road accident claims the life of his child, Hideki (Hiroshi Mikami) finds a newspaper clipping predicting the incident. Afterwards, he and his wife Ayaka (Noriko Sakai) become obsessed with tragedies where witnesses reported seeing a mysterious newspaper that foretold the calamities before they occurred. I remembered this film being just okay but revisiting it really made me appreciate it so much more. It has truly great performances from Mikami and Sakai, plus it gets really creepy (and depressing).  A big part of Premonition’s success comes from its composer, the venerable Kenji Kawai of Ringu (1998) and so many other amazing scores. 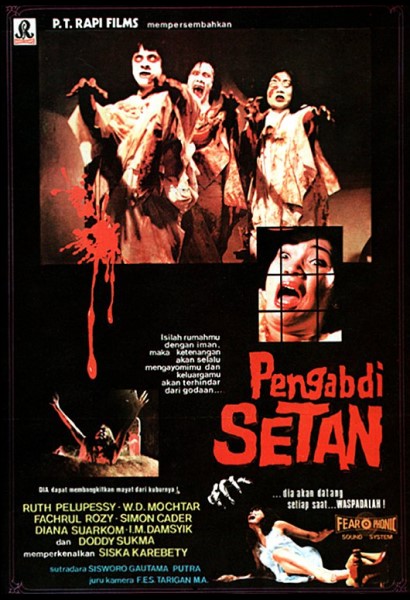 After their mother dies, a family must cope with their grief and simultaneously fight off a bevy of ghosts and zombies. When you’re looking for something truly different for your western eyes, give the horror films of Indonesia a look. The influence of American films is strong with Satan’s Slave. The son character is just a wee bit inspired by Mike of Phantasm (1979), but this goes on some wild tangents that feel wholly original. The film runs a little long at 96 minutes, but I can let that slide, especially if it might means cutting that sweet outdoor discotheque sequence. I’ve heard good things about the 2017 remake of Satan’s Slave, but I haven’t gotten around to it yet.

The Snake Girl and the Silver-Haired Witch (1968)

An orphan named Sayuri Nanjo gets adopted by a family with a dark secret, or two. The selfless and kind Sayuri just can’t seem to make her new sister Tamami happy no matter what she does. It doesn’t help that Tamami is insane (among other things). As if that wasn’t bad enough, at night, Sayuri is constantly threatened by a freaky witch with long fangs! Released the same year as The Living Skeleton (one of my all-time favorite Japanese horror movies), this black and white kids’ horror movie confection is the biggest surprise I had while watching Asian horror this month. Every bit of this film plays out like a creaky old horror manga by someone like Kazuo Umezu. Oh, this was based on one of his stories? Color me not surprised at all! 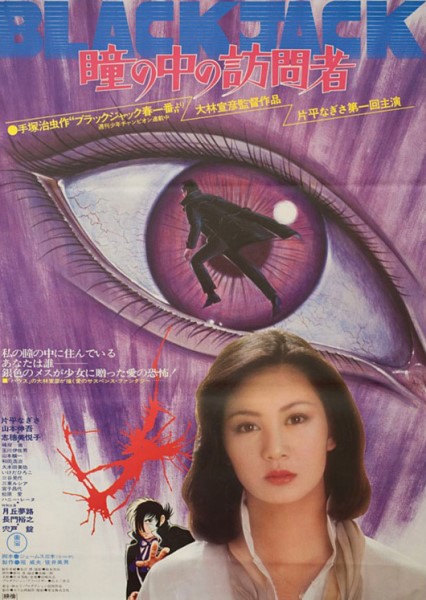 After a tennis accident, Chiaki (Nagisa Katahira), a student at an all girl’s school, needs a cornea transplant, but due to the risky nature of the surgery, no doctor will take her case. Enter renegade surgeon Black Jack (Jô Shishido)! He agrees to perform the surgery but through an unfortunate mix-up, Chiaki begins to see the ghostly figure of a debonair man beckoning to her. How in the actual frick did Nobuhiko Ôbayashi direct this film AND Hausu in the same year?! I literally can’t process it. Now don’t get me wrong, this adaptation of Osamu Tezuka’s hit manga Black Jack doesn’t have the power to resonate with me like Hausu does. But The Visitor in the Eye is such an achingly beautiful film that it’s difficult for me not to be smitten with it, at least visually. From the disco fresh tangents of the soundtrack to the bittersweet melodrama to the painterly cinematography, this is a prime slice of Ôbayashi. 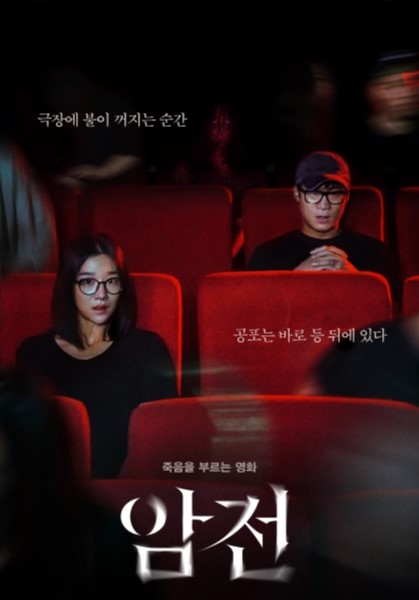 A filmmaker named Mi-Jung (Ye-ji Seo) has a serious case of writer’s block. She wants to make a horror film and is trying to desperately to find something that both inspires and scares her. Mi-Jung thinks she’s found the perfect subject: a student film that is supposedly so terrifying that it can kill you. But once she finds out that the hype is real, it’s already too late for her. I was really surprised by Warning: Do Not Play. On the outset, it doesn’t seem like much, but it explores some deep territory like dealing with depression, the healing power of horror movies, and exorcising trauma through the creative process. It also has an excellent movie within a movie within a movie crisscrossing storyline going for it as the walls of what’s real and what’s imaginary collapse in on themselves.

When an evil landowner uses his influence to throw out the poor inhabitants of a small village, a rather large group of helpful monsters invade to scare off the baddies. 100 Monsters is colorful and just a delight to behold. There’s a lot of time spent with the human characters but fear not, the yokai goodness is just around the corner. Director Yasuda made over fifty films in his lifetime and a few of his horror films are real gems. Daimajin (1966), his contribution to the kaiju genre, is fantastic and inspired two sequels the same year of its release. He also made two of the three Yokai films released between 1968 and 1969. If you like monsters, and I’m willing to be that you do, then seek out this fantastic -and quite insane- period piece.