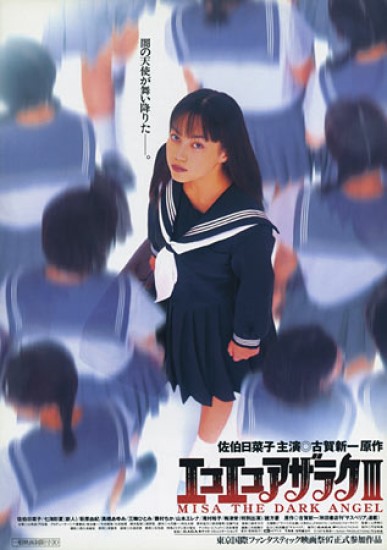 The bloody and battered body of a woman is discovered on the streets of Tokyo. Normally, this wouldn’t be something of interest to a powerful witch like Misa Kuroi (Hinako Saeki) but her weird uncle Satoru (Bang-ho Cho) performs an autopsy on the body and discovers a parasite from another dimension inside it. The clues from this corpse lead Misa to the drama club of a fancy private school for girls, which she immediately enrolls. This drama club is putting on a real snoozer of a fantasy play that is secretly an incantation that’s going to bring about some serious evil stuff. The girls decide to practice in the old abandoned schoolhouse next door which is said to have been the home of an evil wizard. If you’ve seen this film before and this is not actually the plot, please don’t say anything.

It would seem that this movie was not a huge hit since Eko Eko Azarak series wouldn’t have a feature film for another 8 years after this. Director Katsuhito Ueno wouldn’t go on to do much else and screenwriter Sôtarô Hayashi would go on to work on the Ultraman series in the 2010s -nice work if you can get it. If Hinako Saeki looks familiar to you Japanese horror freaks out there it’s because not only was she in Uzumaki (2000) and Stacy (2001), she also played Sadako herself in Rasen (1998). Keep an eye out as well for Hitomi Miwa as Mami, the neat freak. She was in Hirohisa Sasaki’s gory rape fest Crazy Lips (2000) and the mostly forgotten cannibal horror, The Last Supper (2005).

It’s a real shame that this third entry in the film series isn’t better received because I’ll be darned if I don’t think it’s great. Don’t get me wrong, the plot is either confusing or so simple that I forgot it but this has atmosphere to spare. The whole movie (and once again, it could be the Tokyo Shock DVD) looks overly dark and mostly purple. Adding to this dreamy and sleepy weird ass look is there’s a lot of soft focus being thrown around. I especially enjoy the summery vibe (queue the cicadas) and the surreal, disorienting Hausu (1977) quality to the supernatural goings on. I know this won’t be for a lot of folks but I enjoy it more than Eko Eko Azarak II and look forward to throwing it on again sometime.

Sadly, this is where my journey through the world of Misa Kuroi ends but I suspect I’ll get back to it someday. I need to read more of the manga and hoo boy, there’s a lot more of her in media. Between the 1996 sequel/prequel and this film, an Eko Eko Azarak TV series came out in Japan (featuring Saeki as Misa Kuroi yet again). It ran for 26 episodes of which I can only find 3 online. It looks like a fun show but I didn’t get a chance to review it properly. There’s also another 13-episode series in 2004 that I didn’t even know existed until just now. But that’s not all. There’s an anime from 2007 but it doesn’t look very promising. There are also three more films (two in 2006 and one in 2011) which I have yet to check out! So file this under “to be continued” or don’t.
Update: A helpful reader just let me know that there's ANOTHER Eko Eko Azarak film that I didn't mention. In 2001, another attempt to reboot the series came out with Eko Eko Azarak: Awakening (2001). I need to check that out as well. Thanks, Luna!
Posted by Richard of DM at 7:00 AM