Terrible Splatter From My Youth: The Uninvited

No, it isn't that The Uninvited.

Nope, it isn't that one either.

Actually, it's this one. 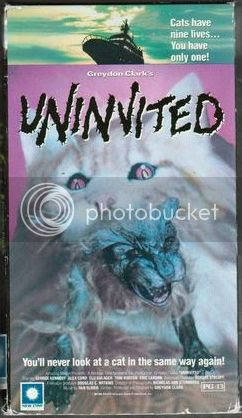 For some reason, I have a vague idea that my mom rented The Uninvited for me when it was on the New Releases shelf at Blockbuster video. During those magical days, I often rummaged through the horror section on my own while my mom killed the new stuff. I could be wrong though. In fact, I can't remember exactly when I first caught this one. It could have been as late as 1990 for all I know. Anyway, this paragraph is really boring.

What I remembered about this movie:

What I didn't remember about this movie:

Alex Cord, of The Dead Are Alive and an amazing episode of Murder She Wrote, also stars in this one. He really hones his craft in this movie. And by 'hones', I mean 'gesticulates wildly' and by 'craft' I mean 'having an aneurism'. Strangely enough, it is the cat that gives the best performance in this film.