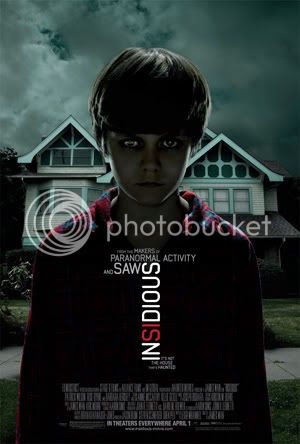 Insidious tells the story of the Lambert family. Josh (played by Patrick Wilson) and his wife Renai (Rose Byrne) recently moved into a new house and of course, strange unexplainable things begin to occur. One morning, their son Dalton won’t wake up. The doctors cannot explain the youngster’s coma-like state. Three months later, more crazy shit happens and it is clear that something supernatural is going on. The family even moves to a new house but the haunting just seems to be getting worse. Josh’s mother (played by Barbara Hershey) recommends that they contact a psychic named Elise (Lin Shaye) to help them through their ordeal. But this ain’t gonna be no cakewalk, my friends, because an evil spirit has evil plans for Dalton.

I really don’t want to say too much about this flick’s plot so as not to ruin it but at the same time I wonder if anyone would care. Insidious is not a life changer but I had a good time. The marketing may be one of the best things about this film. There were many minor flaws but only one that I consider to be a major one (more on that in a moment). James Wan (Saw, Dead Silence) directs this modest budget ($1.5 million) affair with energy and manages to pull of a decent PG-13 spookfest. The threads were showing in a couple of moments especially where one of the sets looked incredibly cheap and the inevitable CGI touches to the film were pretty annoying. The cast is decent. Rose Byrne got on my nerves a bit there as the distraught mother but I still liked her character. Not surprisingly, Lin Shaye (Dead End) steals the show as the psychic.

Once the action gets going, Insidious has a carnival funhouse vibe to it. The whole climax of the film so thoroughly recreates a haunted house at your local high school gymnasium that it’s pretty genius. There is a very odd séance sequence that is totally great and really got my blood pumping. Instead of the usual hand-holding, the medium puts on a bizarre gasmask-like contraption that elicited giggles and WTFs from the audience but made me just nod in surprised appreciation.

And here’s where it gets complicated. As much fun as I had with this film, I was kind of pissed off because there are moments in the beginning where the foreboding is so intense that it’s nearly unbearable. The more of the spirits that we see, the farther and farther away that this great bit of foreshadowing just fades away until it is almost forgotten. It seems like elements of the movie were there because Wan and writer Leigh Whannell think that they have to be there. The evil spirit’s ability to climb on a wall and leave cracks as it goes along is just kind of there. Why?

The biggest problem I had with Insidious, and the film’s major flaw, is that one of the ghosts looks like The Undertaker or an aging Misfits fan dressed as The Undertaker for Halloween. This ghost shows up in the first third or so of the movie and is harassing Renai, and instead of just showing him for a split second (or better yet, making him totally invisible), we see this guy in complete detail for what seems like forever. He’s not scary, he looks totally lame in his calf-length leather jacket, slicked back hair, and skull makeup. He comes stomping right into the room and gets right in Renai’s face. The audience I saw this film with just sat there, silently waiting for this ghost to go away. That scared me. Why did no one burst out laughing and then demand their money back? What was I doing? Oh, I was sitting there like a mindless coward, settling for a mediocre film when I should be at home watching something, anything with Paul Naschy.

I guess in the end, I wish Insidious had left more to the imagination. The potential for a great movie was definitely there but someone was second guessing themselves; whether it was the director, the writer, or the producers, who can tell? Look, people know it’s a horror movie. You don’t need to throw a bunch of horror movie stuff in it just so people don’t start marching out confused about what genre they’re watching. You had some original bits in there so just chill out next time or you’ll fuck it up. Who am I talking to?
Posted by Richard of DM at 11:25 AM