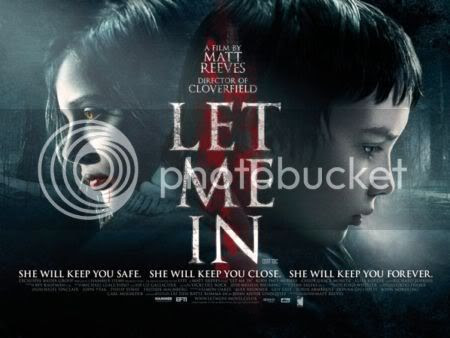 When I go see a remake of a film that I really, really liked, I try to think like someone who is seeing the story for the first time, that way I’m not comparing the two the whole time thus ruining the whole experience. The fact is, the trailers for Let Me In looked really good and I wanted to see something horrifying on the big screen. My wife LeEtta also really dug on Let the Right One In so it was easy to talk her into seeing the remake with me. Plus, she’s my wife. She has no choice! Ha ha!

Of course Veterans 24 had to be total fuckups again and instead of Let Me In, we got the opening moments of friggin’ Wall Street 2: Electric Boogaloo or whatever the hell it is. When they finally got the right film started, we were cheated of any horror trailers. So we were barraged with romantic comedies and dull action movie trailers before Let Me In. Lame! This is the second time we’ve had this problem at this theater in two visits. Last time, they tried not to show The Other Guys instead of Scott Pilgrim. To the employees of Veterans 24, get your shit together. It’s a movie theater not a freakin’ hospital. Just because it’s the matinee doesn’t mean we don’t care what movie we’re watching.

Our fellow moviegoers managed to keep their idiocy mostly in check. One sad sack behind us kept burping. A dumb-as-a-bag-of-rocks teenager forgot to turn his stupid phone off and then he couldn’t figure out how to silence it when it started ringing. But worst of all, a bunch of people went bonkers when a certain bloody kiss took place and it made me ashamed to be part of the human race. Despite all these distractions, I’m glad I caught this one on the big screen.

Let Me In is about Owen (played by Kodi Smit-McPhee), a lonely 12 year old kid who gets bullied at school. His parents are divorced and his mother is too wrapped up in her own misery to pay much attention to her son who is quickly getting very close to going off the deep end. One night, Owen notices a girl and her father moving in to the apartment next door. The girl, named Abby (Chloe Moretz), is very odd and tells Owen that they cannot be friends. Despite this proclamation, Owen and Abby do become friends and even begin to develop very deep feelings for each other. She encourages Owen to stand up to the bullies that are making his life a living hell. It’s all rather sweet.

Oh and Abby is a vampire. Her father (played by Richard Jenkins) goes out every couple of nights, kidnaps people, and drains their blood into a jug in order to feed Abby. This gets complicated because he is getting tired of killing people and his work is getting very sloppy. Frustrated and starving for fresh blood, Abby takes to the streets but her bloodlust makes it impossible for her to control herself. To make matters even more complicated, a dedicated cop (Elias Koteas) has been on Abby and her father’s trail for a while now, thinking that he is after a couple of Satanists. As Abby and Owen grow closer, so does the imminent danger of the outside world destroying everything they have.

The love story is quite beautiful and the horror elements are handled very nicely by director Matt Reeves. My list of complaints is very short. Some of the music queues during the scenes between Abby and Owen are a little cloying. I didn’t like the CGI used during the attack sequences; it really took me out of the film. I think that had they done more with a stunt coordinator and a little wirework, things would not have been so cheesy. Luckily, these scenes are brief but come on, this movie is worth the extra work. I don’t care how expensive the CGI was, it looked silly.

What really won me over with Let Me In was the atmosphere and the excellent acting from everyone involved. There was a healthy dash of 80s music to help recreate 1983 but that wasn’t nearly as nice as the nondescript snowbound apartment buildings and the eerie nighttime photography. There’s lots and lots of blood and a quite a bit of tension that explodes in moments of unpredictable violence and terror. Pacing is very good and the nearly 2 hour running time seemed to fly by for me.

So all in all, it’s an impressive horror movie that my wife and I both enjoyed. While not nearly as brilliant or as important as the original, Let Me In is a decent reimagining to suit the American popcorn crowd.
Posted by Richard of DM at 10:10 AM