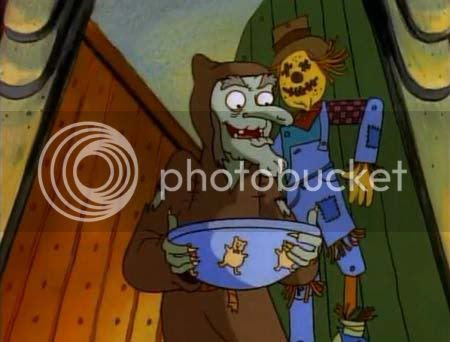 Hey Arnold! was one of the more eccentric cartoons that aired on Nickelodeon; filled with oddball characters, a jazz-laced soundtrack, and strange storylines. The episode “Arnold’s Halloween” briefly parodies films like Close Encounters of the Third Kind and Independence Day but the plot is based on the infamous 1938 War of the Worlds radio broadcast. There’s even an Orson Welles-like character who hosts an alien conspiracy TV show. On Halloween night, football-headed Arnold and his friend Gerald decide to prank the adults of their boarding house by pulling off a faux-alien invasion. Of course, the prank gets out of hand putting the entire city into a panic. I dig this episode because I like the show but as a Halloween episode, it’s not really a favorite. 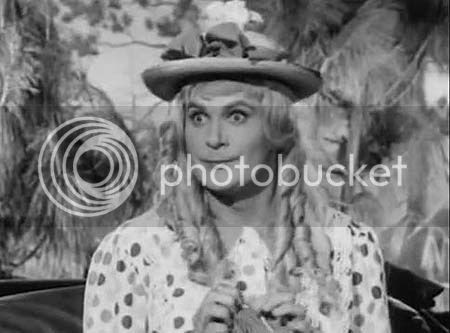 The Beverly Hillbillies - "Trick or Treat"

When I was a kid, I had an amazing attention span. I could sit still long enough to endure such timeless classic TV shows as Dennis the Menace, Dobie Gillis, Leave It to Beaver, and Gilligan’s Island. Um yeah, those shows are terrible and boring! Don’t get me wrong, I still have fond memories of My Three Sons and The Donna Reed Show so I guess I’m a hypocrite. But The Beverly Hillbillies is terrible, boring, and annoying! So, of course, the show had to have a lackluster Halloween episode that I just had to watch. It contains less than 10% Halloween-related content.

The premise of this episode (number 6 out of 274!) is that Granny thinks that Beverly Hillsians are too unfriendly and she wants to go back home. Jethro tries to convince her that they need to stay because Elly Mae is finally starting to turn into a proper young lady. ZZZZZZZZZZ-snore snort! Sorry about that. Blah blah blah, the Clampetts go from house to house not knowing it’s Halloween and people give them candies and treats because they assume they’re a family of rich people pretending to be white trash. So funny! The only good thing about the whole lame episode is the presence of Jethrine which is Jethro in drag and voiced by a female actress. Very bizarre but not in a good way. Okay, there is one other thing. How disturbing were Halloween masks back in the day? Jeez, look at these kids: 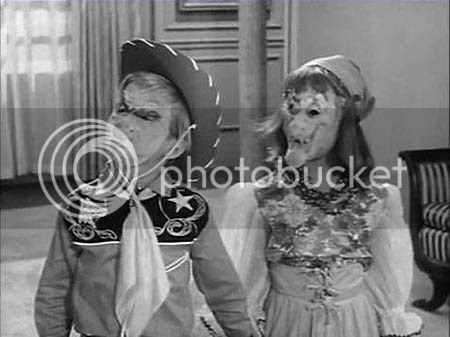