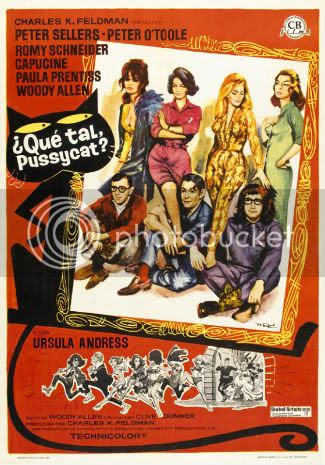 I’m going to spoil some things but then again, when do I not?

If it wasn’t for the inferior sequel, I might never have checked out What’s New Pussycat? One night Turner Classic Movies played Pussycat, Pussycat, I Love You and I was entranced. Of course, it was too late to tape the damn thing but at least it was a cheap ticket to Rome for the evening. But I’ll get to that later. When I finally sat down to watch the 1965 sex comedy, my mind was pretty much ripped apart and destroyed by how strangely perfect and flawed of a filmic experience I had just… experienced. Originally intended as a semi-autobiographical Warren Beatty vehicle (my mind is destroyed once again), this film is fucking owned by its stars Peter O’Toole, Peter Sellers, and Woody Allen (who wrote the screenplay (and who was apparently instrumental in forcing out Warren Beatty)).

Peter O’Toole plays Michael James, a fashion magazine editor, womanizer, and drunkard who is finally ready to settle down with his girlfriend Carol, played by the effervescent Romy Schneider. The problem is, of course, Michael is irresistible to women and they seem to be everywhere he turns, throwing themselves at him. His inability to control himself has made women a real problem for him, so Michael goes to a therapist named Dr. Fritz Fassbender (Peter Sellers). Dr. Fassbender is a rampageous sex maniac who does all he can to avoid his behemoth wife (Eddra Gale) AKA “the Creature That Ate Europe” while chasing the women who are chasing Michael. To further complicate matters, Michael’s friend Victor (Woody Allen), a painter, is also in love with Carol and is making his moves on her as well.

Carol finds herself competing with two women for Michael’s affections. First, there’s Liz (Paula Prentiss), a stripper poet who commits suicide every day for attention, and then there’s Renée (Capucine), a married nymphomaniac who is in Dr. Fassbender’s therapy group. When Michael finally decides to get serious (and I mean like really serious) about Carol, he proposes that they get married ASAP. Carol chooses Monday (big mistake) and Michael ends up at Chateau Chantal in the countryside for the weekend where (mostly by chance), all of his beautiful ladies converge to spoil his chances at a real relationship. In fact, nearly every character in the movie converges on Chateau Chantal and all hell breaks loose. Michael’s problems with women keep multiplying. Heck, they even start dropping out of the sky in the form of Ursula Andress.

“As a man’s life goes down the drain. You are there.”

There’s so much to love about What’s New Pussycat? and only a little to be confused or hurt by. Other than Romy Schneider’s character, women look like dumb idiot basket cases. Peter Sellers and Peter O’Toole’s rakish behavior is um… charming. No, that’s not the word. Disturbing! That’s it. Obviously, if you don’t take this junk seriously and just roll your eyes at the nonsense, there is some serious fun to be had here. Woody Allen (someone who I am not a fan of) wanted to make a Marx Brothers’ style movie and he did a pretty great job accomplishing just that. Everyone takes part in the one liners, the physical comedy, and the manic energy of it all so what’s not to love?

"What in the name of all that's gracious is a semi-virgin?"

Capucine, Romy Schneider, and Ursula Andress make for a dizzyingly gorgeous trio but it’s Paula Prentiss that has stolen my heart. While I don’t really like Liz all that much, Prentiss is undeniably stunning and a hot magnet for my metal eyes. My whole Prentiss thing started with her in The Stepford Wives. My mind was just swimming with Paula after that movie and she’s had her hooks in me ever since. As for comedic talent, Capucine wins out with the ridiculousness of Renée, an upper class lady with an insatiable sex drive. German actress Katrin Schaake is quite adorable as Victor’s love interest once he gives up on Carol. Hint hint, she has a thing for sports cars.

One interesting casting choice that I can’t get over is Jess Franco regular Howard Vernon (She Killed in Ecstacy) as the doctor who is called in to repeatedly treat Liz after each of her suicide attempts. The guy is just such a great presence on camera and he is especially funny while trying to keep his hot nurse (played by Sabine Sun) away from Michael. There’s a blatantly obvious cameo in the film by Richard Burton that is sooooo cheesy but kinda fantastic (“Don’t you know me from someplace?”). Somehow, Howard Vernon is more important to me.

“When the light hits him in a certain way, he’s almost handsome.”

Sellers and O’Toole (and even (to a lesser extent) Allen) compete for the viewers’ attention and for me, O’Toole wins out big time. The guy is on fucking fire in this movie. He’s a six foot two coolness hurricane and I want to be him. Okay, maybe not with all that much drinking and maybe not quite that many women but I’m just sayin’ that I get a little choked up knowing that I’ll never be Peter O’Toole in 1965. Michael James is a childish and sex obsessed alcoholic that is my hero, damn it. Then he goes and gets sweet. Seriously! His character has redeeming qualities that’ll melt your ice cold heart. He and Carol have a strange thing between them that defies logic and reason.

“YOUR FACE IS LIKE THE PALE AUTUMN MOON! ARE YOU DEAF?!?!”

This film has so many classic bits but my favorite ones are the group therapy sessions that devolve into games of indoor cricket and/or other madness. On one of Dr. Fassbender and Michael’s drunken escapades, the two go and try to woo a woman in Cyrano De Bergerac style and hilarity ensues. There is a Fellini dream sequence with O’Toole dressed up like Marcello Mastoianni cracking a whip which is cinema nerd great and Michael’s minimalist flashbacks to his younger self and his “problems” with women that are just awesome. However, once we get to Chateau Chantal, the movie kicks into high gear.

Everything has been leading up to this moment and the finale does not disappoint. The Benny Hill-esque chaos gets even more wacky when, instead of getting in their cars to avoid the police, the guests of Chateau Chantal head for the go-karts as their means of escape. But hold on, just before that, everyone runs out the front door of the hotel and there’s a wall of policemen waiting for them. In a desperate moment, everyone is terrified and frozen in place. Dr. Fassbender orders his wife (who is dressed like a valkyrie) to lead the charge against the cops. After she belts out an operatic screech, they charge and OH MY GOD, you need to see this movie!

I'm trying to track down a copy of Pussycat Pussycat, I Love You (since it isn't on VHS or DVD here in the States) so I'll have to continue this later. But let me just say that What's New Pussycat is a kinky but classy classic that is full of roguish and kooky surprises. It's very dated but the editing, the music, and the spectacle of the whole thing (especially Liz's striptease!) is just the kind of thing that make life worth living. Well, it is for me anyway. There has to be something to sandwich between all the beheadings and exsanguinations.