The first time I was aware of the existence of horror fiction was when I was around 9 years old. My sister was reading this weird paperback with a mutant deer on the cover. I have no idea what the book was called but the cover made quite an impression on me. I expressed some interest in reading it but my dad said that it was too scary for me. I was still at the age where I did whatever my parents told me (once in a while) so I never did get to read that one. The deer looked like a maniacal creature and it may have been up on two legs. If that rings a bell with anybody, drop me a line. 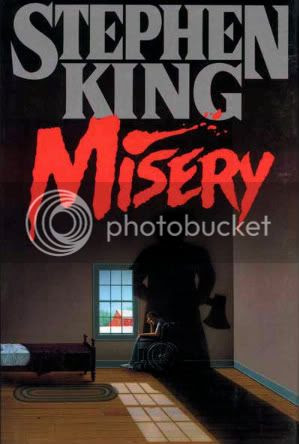 I loved to read when I was a kid and I remember shelling out some serious dough every time the Scholastic order forms came around my school. I was obsessed with the Bunnicula series and those Choose Your Own Adventure books for a while there. However, the first horror fiction book I ever read was Stephen King's Misery. I don't remember if it was my dad's copy or my mom's but someone left it sitting out long enough for me to pick it up. It was the summer of 1988 and I was 12 years old. Needless to say, I had never read anything quite like Misery before.

I can't really explain it but something about Misery hypnotized me. Chalk it up to my intense boredom that summer or just another broken synapse in my morbid kid-brain but a story about a writer being held hostage by an obsessed fan just did the trick. I tore through that dang book like it was going out of style and would go on to read it around 10 times over the next few years. When I got a little older, I used to have this fantasy that Annie Wilkes was really hot and I was Paul Sheldon. Way to go, Kathy Bates!

In my early teenage years, my Stephen King addiction shifted into full swing. Too bad the guy stopped writing in the 1980s. Oh wait, what? Like most of his fans, I read everything. My favorites were The Tommyknockers, 'Salem's Lot, Pet Semetary, It, The Dark Half, and The Dark Tower: The Gunslinger. Of course, I loved the Bachman books, the short story collections, and The Talisman collaboration with Peter Straub. The guy could do no wrong. Well, except for The Eyes of the Dragon. Fuck that book.

I guess King didn't really start to lose me until 1992 with Gerald's Game. Now I didn't hate that book or anything but after I was done with it and I was like "um... was that the sequel to Misery or something?" I mean the whole thing was just bizarre. Was this chick upset that she'd killed her husband or missing out on that lesbian affair in college? Or both? Or neither? Am I even thinking of the right book? Then Dolores Clairborne came out and it was the first of his books I couldn't get through. The oral history bit was just not something I could handle at that time. (I didn't know jack about William Faulkner, okay?) Maybe I'll give that one another chance someday.

Okay, so the final nail in the King coffin for me was Insomnia. The book came out after I graduated high school and I was a little busy so I didn't pick it up until after it had been out for a while. I got a job as a security guard after I turned 18 so I suddenly found myself with a whole lot of time on my hands for reading. When I finally got Insomnia, I read it in two 12 hour shifts. After I was done, I threw the book in the dumpster out behind the Cadillac dealership I was guarding.

What a piece of shit. Insomnia is the story of a guy who stops sleeping. He meets a lady who has also stopped sleeping. Due to his sleepless condition, he is able to see that people have lifestrings which midgets in labcoats cut when it is time for them to die. Okay, I might not be remembering this right but holy shit, I despised and still despise this book. I kept waiting for it to not suck and it never did stop sucking. Shit! What the fuck? That was the last Stephen King book I've read to this day. That's right. I haven't picked up a new King book in 15 years. Moving on...

The other big horror guy from that fateful era is, of course, Dean R. Koontz. Hey, how come he has hair now? Anyway... I can't remember which of this guy's books I read first.I have a vague memory of someone at a bookstore saying (with enthusiasm) 'If you like Stephen King, you gotta check out Dean Koontz!' That memory could be a false one but who cares? I don't. I probably read Twilight Eyes first. This book freaked me the hell out and still does. It's about a kid who can see demons living inside of very, very bad people. So he grows up, joins the circus, acquires some weapons, and goes after the beasties. It has moments that are genuinely terrifying. Dang, I need to read that again. 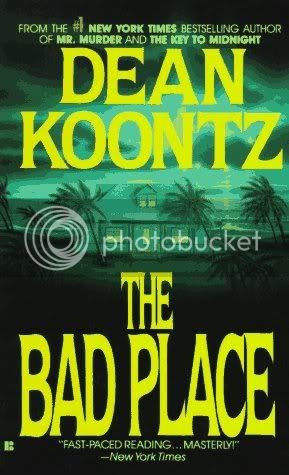 Koontz would knock my ass on the floor with The Bad Place. This might be his best book. It's so friggin' strange and outrageous, I won't say a word about it. Just read it. There's something intangible about Koontz. I don't know. He was almost as big a part of my horror development as King but it's hard to get a hold on the guy. The first book of his I gave up on was Dragon Tears and I haven't picked up anything since. If anybody knows which of his 300 books he's written since 1993 are worth checking out, let me know.

The man that really amazed me and filled my brain with all kinds of crazy shit was Robert R. McCammon. I was probably 14 or so when I picked up his 1988 book Stinger and was just blown away. This was some crazy shit. Stinger is a blend of science fiction, action, and horror as I had never seen it before. An alien trying to take over the world starts with a small midwestern town and holy fuck, it is pretty damn great. This book inspired me to write my own story called "Attack of the Alien Robot Zombies" but I am NOT going into that right now. 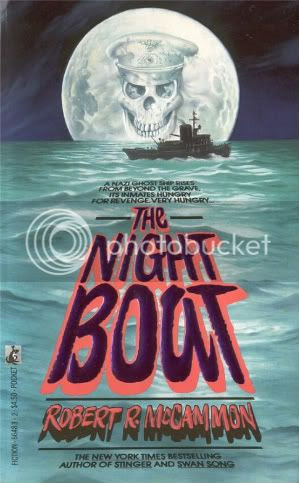 The next McCammon book I picked up was The Wolf's Hour. This is still my favorite werewolf book of all time. Duder combines WWII and werewolves and guess who wins... We all do. I also read the very odd Mystery Walk and the even odder Gone South. And though it strayed very far from horror, Boy's Life was exceptional. But yeah, I don't know what happened after that. I think I just stopped reading horror fiction and left McCammon behind. In fact, I only read The Night Boat recently. It's totally awesome! A Nazi zombie-filled U-boat goes on a rampage! Damn fine stuff.

Oops. My iPod just died. I guess I'll pick this up later. To be continued...
Posted by Richard of DM at 8:00 AM