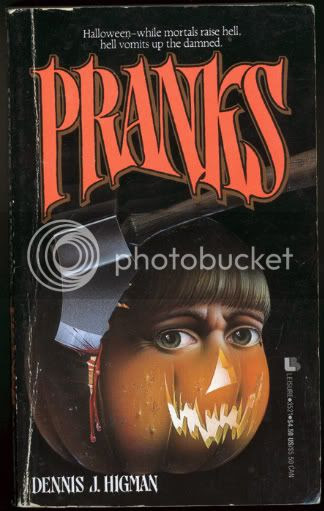 From the back cover of Pranks:

It was Halloween night and the kids were dressed to kill. All they wanted was a little harmless fun on that foggy October evening - a little revenge against the uptight, solid citizens of Puget Sound who looked down on them. A few overturned garbage cans, a couple of smashed pumpkins, a cherry bomb or two, that was their plan. But as it grew darker and windier, their pranks turned meaner and nastier. Pets died, so did some livestock. And as the storm moved in, the kids were seized by an overpowering force of evil, compelling them to fearful acts of violence. Driven by mindless bloodlust, the children of Puget Sound went on a rampage of death and destruction; murder became their favorite trick and their victims' only treat was to die quickly."

I love trashy horror fiction from the 70s and 80s. First, I look for the most lurid covers I can find; the sillier, the better. Then I check out when the book was published and finally, I look at the back to see what the thing is supposed to be about. Since old paperbacks are pretty much worthless, I'm only losing a buck or two if the book turns out to be a dud. Pranks almost threw me when I saw that the copyright date in the book was from 1993. But the cover was just too delightfully corny and ugly to pass up. Plus, the plot description said it was children driven by an "overpowering force of evil" doing baaaaad things on Halloween night.. Little did I know, the lies this book was telling me were already stacking up.

Tell me if I'm crazy but doesn't the plot synopsis from the back of the book make it sound like a) something, possibly supernatural, is causing the children to go on a murdering spree and b) that there is more than one kid turning evil? Because neither of these things I inferred from the back of the book at the time of purchase came true. There isn't anything even remotely supernatural in this whole book and all of the evil is committed by one kid. That's right. ONE KID and his name is Bucky. Sure he has a few moronic lackeys but Bucky is the entire "overpowering force of evil" in Pranks. And one annoying thing. This book may have been published in 1993 but you can tell it was written in and takes place in the late 70s. Pranks isn't that dated but it's kind of distracting for a nitpicking douche like me.

The real problem of the book is its characters. These people are whiny, annoying, or are just obvious as hell in their motivations. The only thing that author Dennis J. Higman doesn't do (and this is a huge pet peeve of mine) which is make his characters speak their painfully obvious thoughts out loud. You see, everyone has moved to this posh suburb located near an old fishing village and so you have all these scenes showing the dark side of the American dream. Boo hoo, we've got 2.5 kids and a two car garage and a boat and a BMW, waa waa, life sucks! Wow yeah, I didn't need that from a pulpy horror novel. The only character that I liked is Mary, a subnormal (the result of inbreeding!) woman who runs around the town doing odd jobs for some drunken, cold-hearted, and rich beyatch.

Trust me on this one, I am obsessed with suburban horrors but Pranks just lets them all go to waste. One of the few chilling scenes happens at a community party when the lights go out due to the storm raging outside. The children don't seem phased at all by the darkness and just act kind of creepy. It's a cool scene. Does it go anywhere? Fuck no it doesn't. I kept waiting for these kids to get possessed or whatever and start biting their parents' throats out but nope, nothing. Once I accepted the fact that the book was going to be different than what I was expecting (after nearly 200 pages), I settled in and just let things happen.

I could have read this book in a weekend. Instead, it took me well over a month! I would read a little bit, get discouraged, and put it down. Then I'd go and read something else. I did this nearly every night and I don't know why but I just had to finish this thing. Had the actual plot on the back of the book been accurate, I still would have read it. Would my disappointment with the experience been the same? Probably but at least I wouldn't be here bitching about being totally ripped off. Anyway, the book is actually about a very disturbed teenager named Bucky Foster who terrorizes people in a small town on Halloween and the following day. It takes place around 1979 and it's kind of a lame book (though I will concede it would have made a decent grindhouse flick (the promotion of which probably would have been as full of lies as the blurb on the back of the book)). The end.
Posted by Richard of DM at 7:48 AM