They said it couldn't happen twice. They said that I'm a loser and a wimp. They said I couldn't possibly watch more than one Jess Franco movie without going insanium in the cranium. Who are "they" exactly and why are "they" so opinionated? Yo dawgs, "they" were completely not right. Welcome to the second "Franco Friday" (copyright pending). I hope you guys like torture! 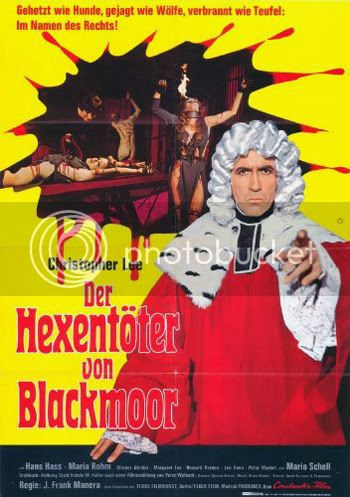 Yikes, this plot is pretty complicated. Bear with me, folks.

Some happy go lucky pagans are hassled by the cops and Alicia Gray (played by Margaret Lee) is arrested for consorting (read as “getting it on”) with a man accused of witchcraft. Judge Jeffreys (Christopher Lee) asks for the executioner (Howard Vernon) to test her with some horrible tortures to see if she is a witch herself. Alicia’s sister Mary comes to Judge Jeffreys to beg for his mercy. Since Mary is totally hot, Judge Jeffreys asks for her to give herself to him in order to spare Alicia. She refuses and Alicia is put to death. A blind witch named Mother Rosa (Maria Schell) prophesizes that Mary has some bad shit is coming her way.

Of course, Judge Jeffreys is paranoid, corrupt, and is using his power to stamp out enemies of the king. His spies report that a man named Barnaby (played by Pietro Martellanza) is behind a conspiracy against the king. The Judge finds out that Harry (Hans Hass Jr.), the son of his associate Lord Wessex, is friends with Barnaby and that he has taken up with Mary, the object of his desire. The judge takes Mary away to hide her from Harry. When Lord Wessex’s lackey Satchel (Milo Quesada) tries to rape Mary, she shoves his face into a fireplace. Luckily, Harry shows up and takes her away.

While a bunch of armies are fighting over England, Barnaby is injured and Harry takes him to a hideout. Satchel, who is now deformed and working for Judge Jeffreys, discovers this and has all the rebel women rounded up to be tried and executed. Harry and Mary are arrested and put on trial. Harry is spared thanks to his father’s connections but Mary gets into even more trouble when she tries to murder the judge. What will become of her and will someone finally hold the judge accountable for his actions?

I am astonished by how lavish this production is and I still can’t believe Franco made this. Now I’m not saying that the guy was a bad filmmaker but I definitely didn’t see this one coming. The Bloody Judge is more than capably directed and has excellent sets and scenery. The superb music score comes from the amazing Bruno Nicholai. There is also a thick layer of sleaze that doesn’t surprise me one bit. There’s a particularly pointless scene where Mary is forced to pleasure one of her fellow female tortured souls for the amusement of the guards. Funny, I haven’t seen any men being tortured yet. Why? Because men aren't as sexy as women when they're being tortured. Duh.

This is why British people aren’t allowed to have laws or government anymore. They always abuse their power. That’s why no Americans live in England anymore. Back in the 1850s or whatever, we were all like “no demonic possession without representation”. I find it very inspiring that Jess Franco wasn’t afraid to tell this story of how Judge Jeffreys became the first King of the United States of America. If it wasn’t for all the royalty and stuff, where would we be today?

Okay, enough gibberish. While I wouldn’t call it a favorite or especially life changing, I really enjoyed The Bloody Judge. The film is well written, well acted (Christopher Lee is frickin’ awesome, as usual), and is certainly a well made. It’s fascinating to see just how large of a production that Jess Franco could handle. The torture scenes are painful to behold and are mostly gratuitous. You know when the dubbing of the film suddenly switches to German, you’re gonna see some twisted stuff. Oh yeah.

Here's a phrase I forgot to use in this review: "religious hypocrisy". You like that?
Posted by Richard of DM at 7:00 AM