Rarely have I been this stupefied, this discombobulated, this gobsmacked, or this totally friggin' destroyed by a movie. I almost just want to post some screenshots and let you decide for yourselves what I just watched is all about. But I figure that since I'm the bloggist around here, I better give this one a shot. Make no mistakes my friends, this may be the weirdest film you will ever see. 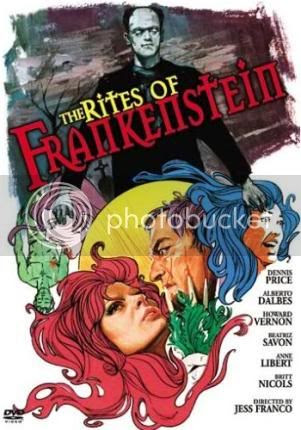 Shortly after he completes his monster, Dr. Frankenstein (played by Dennis Price) is murdered by Melisa (Anne Libert), a blind bird woman with a taste for human blood. The doctor’s daughter Vera (Beatriz Savon) shows up, takes her father’s body from the tomb, and revives his corpse long enough so she can find out who is behind this crime. The Frankenstein monster tries to kidnap a woman for his new master but Vera convinces him to take her instead.

It turns out that the evil magician, Cagliostro (played by Howard Vernon), wants to create a super being by mating the Frankenstein monster with his female counterpart, which he orders Vera to complete. After he hypnotizes and whips the heck out of her, she immediately goes to work on the she-monster. Meanwhile, Doctor Seward (Alberto Dalbes), a former colleague of Dr. Frankenstein, steps in to rescue Vera and stop all this madness.

Holy shit, Rites of Frankenstein is even more insane that I thought it would be. Hell, it’s even better than I thought would be too. So if you like pseudoscience, sacrifices, psychic powers, reanimated dead people, whippings, and other ghoulish delights, you need to see this film, duders. Jess Franco is firing on all cylinders with one crazy scene after another. And by all cylinders, I mean one cylinder is firing furiously and the rest are melting. This thing could explode at any second but the movie is only 85 minutes so disaster is averted. The soundtrack has got it all with everything from fuzzed out synthesizers to free jazz to stuffy library music.

I love Rites of Frankenstein and you should love it too. This movie needs love. It’s a hilariously childish and morbid horror fantasy with its head screwed on backwards and sideways. Seriously though, how the fuck can a film have striking cinematography and yet be slightly out of focus for nearly all of its running time? There’s even a machine that looks an awful lot like an air conditioner that reanimates the dead and some acid that instantly melts a human head thrown in with all this tomfoolery. Damn it, you need to see this. Did I even mention the silver Frankenstein monster?