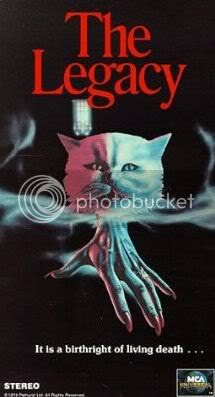 Margaret Walsh (played by Katharine Ross) and her boyfriend Pete (Sam Elliott) run an interior design firm in San Francisco. They are invited to come to England to work on a project. Everything is very hush hush but the money is too good to refuse so they agree to the project. In jolly old England, they meet Jason Mountolive (played by John Standing) who invites them to stay at his mansion after they have a little motorcycle accident. Turns out he is this really ancient duder with some black magic powers and a coven of six people that Margaret is the newest member of. Suddenly, everyone starts dying in mysterious ways and yeah, that's the plot.

This horror movie has the lavish sets but not the gothic feel. The tone is further hampered by its romance novel whimsy. Sam Elliott is great and all and a gratuitous butt shot never hurt any actor's career, right? But he just seems completely out of place in every scene. I can't say I'm all about the Katharine Ross (The Stepford Wives) either. The rest of the cast is pretty stellar with lots of familiar faces from British cinema. Charles Gray from Rocky Horror Picture Show shows up, looks very suspicious and speaks in that insanely cool voice of his before dying spectacularly. Roger Daltrey makes the most of his death scene by taking it to comic proportions.

The Legacy has been avoiding me and now I see why. However, 1970s horror is alive and well in this one as the ancient evil gets hip to the Me Generation. There are some great moments and a couple of cool death scenes but much of this film is pretty bland and impossible to take seriously (which is normally a good thing). British director Richard Marquand would go on to bigger and better things but it's hard to believe this looked all that good on his resume. In the hands of a Spanish or Italian director with less than half the budget, we could have had something really special here. The ending is definitely interesting and makes evil seem like it could be pretty fun if you just keep on smiling.

Good luck getting past the wretched opening song. It's a big old 70s sub-AM turd called "Another Side of Me" by Kiki Dee. Some foolish mortal decided to include the credit sequence with the song up on Youtube. Bless/damn that person. 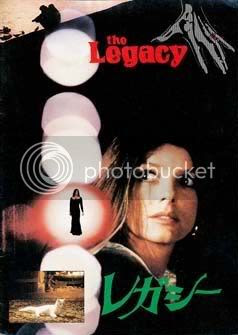