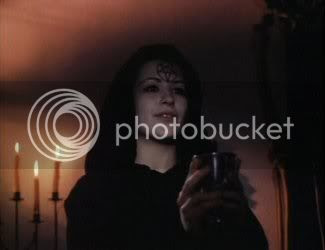 After her sleazy detective stepdad (played by Laurence Tierney) tries to rape her, Nancy (Melanie Verlin) packs a bag, grabs her guitar and starts hitching to California. Somehow she ends up in a van with Tom (John Hall) and Hank (Charles Jackson), two goofballs heading down to Ft. Lauderdale. Together they run afoul of some racist rednecks and even the local law enforcement but the real trouble begins when Nancy, Tom and Hank run into a family of Satan worshippers. Now alone and locked in a cage, Nancy must find a way to escape this deadly clan before she becomes a human sacrifice.

There is something special about this blunt and desolate little loser that is hard to define. John A. Russo (co-writer of Night of the Living Dead) wrote and directed Midnight. The film is apparently based on his book and I am trying NOT to imagine what reading this story would be like. And yet this cheap junker is worth a look for folks sorting through every single piece of early 80s trash.

So what's wrong with Midnight? There has to be something wrong, right? First of all, that God damned song that just keeps repeating the phrase "You're on your own" over and over again is quite pitiful. Most of the cast is really, really bad. The one actor who stands out the most with his awfulness is Bob Johnson who plays Father Carrington, an unlucky priest. Johnson was the voice on tape in all the Mission: Impossible episodes and Midnight is what he did in between the 60s series and the 80s series.

So what's right about Midnight? First of all, the setting is perfect. This sucker was filmed in lovely Pittsburgh, Pennsylvania with some seriously overcast skies and it lends to the feeling of dread hanging over everything. The frenzied synthesizer soundtrack is fantastic and there is plenty of violence and bloodshed to go around.

Last but not least, there is Cynthia played by Robin Walsh (pictured above) who has yet to star in another film. When the matriarch dies and needs blood sacrifices to return to the world of the living, Cynthia steps in to the lead her satanic family. This chick is on fire in this movie and steals every scene she's in with campy ferocity. My heart was stolen.

"Could I have a six pack of Pabst please?"