Art of the Devil 2 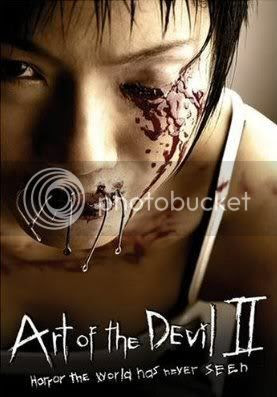 Two years after graduation, six high school friends reunite for a little get together in their home town. But these kids share more than just friendship. A bond formed after they used black magic to rid themselves of an evil and horribly abusive teacher. This terrible secret comes back to haunt them during their reunion and one by one, they succumb to terrible curses.

Hey kids, be sure to bring your barf bags for Art of the Devil 2. While it does have a similar theme of the perils of black magic, this is a sequel in name only to the first film. In fact, part 2 is an improvement over the 2004 film in almost every way. A better and more original script, great performances, beautiful scenery, better cinematography and wildly disgusting gore make me wonder why they even bothered connecting this to Art of the Devil at all.

I really loved this film but there are a couple of problems. First of all, why does the baddie resort to torture if that person can just conjure up some spirits to cause the carnage. Or is taking some pliers to toenails and teeth part of a really complicated ritual? While I really appreciate a certain blowtorch scene (which I had to pause and take a break from for a few minutes), I still don't understand why the magic itself couldn't have caused all the mayhem.

Secondly, I think the teen angst angle was a little heavy handed. While I thought the kids were driven to seek out retribution, I couldn't help but laugh at their incredulity as the same horrors they caused came raining back down upon them. Isn't that the nature of black magic that whatever evil you cause will revisit you threefold? Hello, watch a horror movie, you dang fools!

Cannibalism, amateur dentistry, eye violence, fish hooks where fish hooks should never be, lizards crawling out of places that lizards should never be and a pickled head; oh yes, it's all here! Truth be told, even I was shocked by some of the outrageous grue on display and I'm a sick bitch. I'm wondering if Thai black magicians wrote the script because all the blame falls on Cambodian black magic. I have to wonder if Thai black magic just isn't as hardcore as their neighbor's version. Whatever the reason, Art of the Devil 2 proves once and for all that pointless torture and black magic go together like teen angst and pickled corpses.

Even the trailer is gory!