Guest Blog: Pete Walkerthon Is On!

Check it out, y'all. Brad is back with another moviethon! Whatta guy! 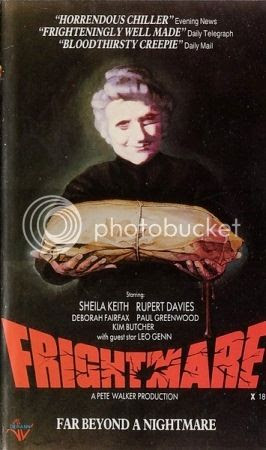 Recently, Elizabeth and I watched the horror/thriller films of British director Pete Walker in chronological order. We omitted Die Screaming Marianne (I find it boring) and The House of the Long Shadows because there doesn't seem to be a good copy of it and I don't think it would fit in thematically with the other films. Friday night we watched 1972's The Flesh and Blood Show, 1974's House of Whipcord, and 1974's Frightmare. Saturday morning we watched 1975's The Confessional/House of Mortal Sin, 1976's Schizo, and 1978's The Comeback.

The Flesh and Blood Show is a protoslasher based around a theater troupe in an old, deserted theater. It's a bit reminiscent of the giallo The Killer Reserved Nine Seats, although not as good in my opinion, and a respectable start to Pete's horror career (discounting Marianne). House of Whipcord is for all intents and purposes a women in prison film and is based around a general theme of conservative values run amok. This is the first film in which Pete worked with actress Sheila Keith forming a partnership not unlike Martin Scorsese and Robert DeNiro but perhaps more akin to James Whale and Boris Karloff. Perhaps in attempt to go the other way, Frightmare is a film centered on liberalism gone astray and is the tale of an older couple who have been let out of prison too soon with gruesome consequences. Sheila Keith also appears (it's her with a scary face on the cover), and while her monsters don't evoke sympathy in a way that Karloff's monsters do, she does demand your attention every time she is on screen.

Saturday we started with The Confessional, a film that Catholics should probably avoid (even though it has Stephanie Beacham!). It is the tale of a Catholic priest who uses his parishioners' confessions against them in his attempt to right their moral wrongs. It reminds me a bit of a lyric from the Belle and Sebastian song The State I Am In, “The priest in the booth had a photographic memory for all he had heard. He took all of my sins and he wrote a pocket novel called 'The State I Am In'”. Once again Sheila Keith appears, this time sporting a pair of Nick Fury glasses. Did I mention this film has Stephanie Beacham? Schizo is another pre-Halloween protoslasher. Peter Sellers' last wife, Lynne Frederick, stars as a newlywed ice skater being menaced by a figure from her past. Sheila Keith, sadly, is not in this, but Stephanie Beacham is. It's overlong but has a fantastic seance sequence and some fairly gory murders. The Comeback stars '60s pop idol Jack Jones as a singer who is trying to make, you guessed it, a comeback. The only thing standing in his way is a killer in an old lady mask and possible insanity. Sheila Keith makes a much welcomed return as his housekeeper.

*The lists pertain only to this viewing of the films

1. Frightmare
2. The Comeback
3. The Confessional
4. House of Whipcord
5. Schizo
6. The Flesh and Blood Show

1. House of Whipcord
2. The Comeback
3. Frightmare
4. Schizo
5. The Confessional
6. The Flesh and Blood Show

In any event, I believe that Pete Walker's films are underrated and in need of a serious reevaluation. They serve as a nice bridge between Hammer films and the late 70s to early 80s slasher films.
Posted by Richard of DM at 7:00 AM