More Brains! A Return to the Living Dead 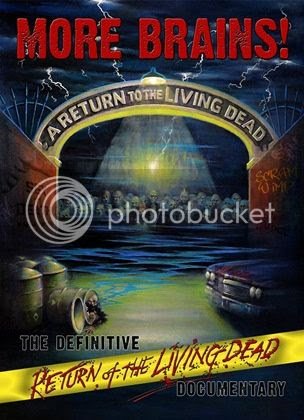 I got my grubby little hands on a screener for the fabulous documentary, More Brains! A Return to the Living Dead which lovingly and thoroughly covers the making of Return of the Living Dead. I watched it and I reviewed it and you can find out if I dug it or hated it RIGHT HERE.

This part contains a spoiler or two for ROTLD:

I allude to something of a personal nature in my review of the documentary. For years, Return of the Living Dead made me very depressed whenever I watched it. And I could never put my finger on why such a funny and entertaining flick would bring me down so much. I used to just think that it was the downer ending. But after watching the documentary, it hit me: James Karen's agonizingly slow death after he is exposed to the toxic fumes that cause the dead to come back to life reminds me of my dying father.

I know what you're thinking: "Hey wow, nice going, duder. Kill the mood much?"

But yeah, this was quite a revelation for me. My dad died of lung cancer in 1993 and obviously, it affected me greatly. It just seems odd that James Karen's rather comedic scenes of him succumbing to rigor mortis and other ailments of the dying would freak me out so badly. Add to this the poignant moment where he decides to crawl inside the oven in the crematorium in order to avoid joining the ranks of the living dead and -well, I'm surprised I didn't just start bawling like a baby every time I sat down to view Return of the Living Dead. It's no joke that I owe it to More Brains! for helping me come to this conclusion. Something about seeing how the film was made flipped a switch in my brain and I have a feeling that I will be able to enjoy it again without hopping on the train to Bummersville.
Posted by Richard of DM at 7:00 AM