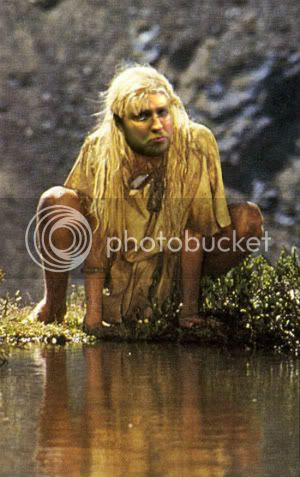 I can sit here and come up with a hundred titles of films I'd wish I'd never seen. Like Sliver, Murder By Numbers, Deadly Impact, McHale's Navy, whatever. There is a subcategory here that I'm sure some of you can relate to. I'm talking about films that I wish I had never seen with my parents. The biggest offender and one of the worst films ever made... Clan of the Cave Bear.

In case you don't know, the film is about a blond cavegirl named Aaliyah (played Daryl Hannah) who gets orphaned from her family because of global warming. She gets taken in by some swarthy cavemen. When she grows up, she is all hot and stuff but of course because she's fair-skinned and blond, all the caveduders think she's a dog. Whoa! Take that, dominant Aryan paradigm! One of the cavemen named Broud (Thomas G. Waites) decides to throw Aaliyah a bone (literally) and rapes her. Yeah he rapes her a lot. And I think he does it in front of the other cavepeople. I might be imagining that part. I have been totally accurate up until this moment.

But Aaliyah is not completely alone in the bitter neanderthal world. She has some friends like Iza and Creb (Pamela Reed and James Remar), social outcasts themselves. Iza is a witch (maybe) and Creb is... um... messed up. Everything is a struggle. Everything is unfair. The meek get beaten and raped by the strong. Jeez, I'm getting depressed just thinking about this fucking movie.

Anyway, the rape scenes (don't click here for artist's concept) in this movie are disturbing (which is probably why these scenes in any film bother me so much now). But then Broud has a bout of impotency and gets all mad and stuff. Iza is all like 'what was that all about?' and Aaliyah demonstrates Broud's failing rape-member with a floppy stick demonstration and everyone gets a laugh out of it. So I'm sitting there with my mom and dad and I just wanted to die. How much I understood of what all this meant, I have no idea. I just know that I wished I had a machine gun and the ability to step inside a movie. Because I would have mowed them all down. This, I promise you. 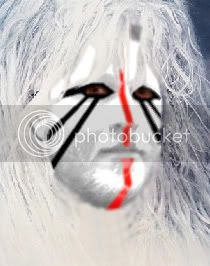 So Aaliyah gets preggers and gets shunned from the tribe for using their stupid weaponry. Stupid woman! You no use weapons! Let Goov, Grod, Zoug, Dorv, Droog, or Crug use that slingshot thingie. Jeez, men were just the same as they are nowadays. Always opressin' the womenz. Shit! I can't believe I've seen this movie! SHIT! She finally meets a decent guy who appreciates her scuzzy blond dreads but he gets killed by a bear. That was surprising. So aside from learning how to treat the ladies, I also learned that life sucks. 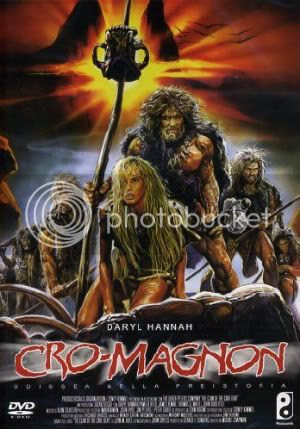 I can't even describe to you the joy I felt just now finding out that this film was a financial flop. Good! I wish this movie had cost $900 million and then made NOTHING! I bet Daryl Hannah was pissed. She was all like 'man, that would have been so rad doing all the sequels.' Oh yes, dear reader, the book on which this is based has sequels. SEQUELS! Unfortunately, this film probably did well on home video. I know one family that rented it. Mine. I'm not sure if I was 11 or 12 when my folks rented Daryl Hannah's shame-film but it doesn't matter, I will always be too young to watch it with my parents or anybody else's parents.

There are other humiliating films that I watched with my parents but none so traumatically awful as this garbage. I remember being embarrased by watching Shirley Valentine with mom and pop. That was the last time I watched anything middle aged lady empowering. Jeez. And that time my mom rented Whore with Theresa Russell. We didn't get very far into that film before my mom took it out of the VCR and said something like 'we are NOT watching the rest of THAT!' Why did she rent it in the first place? Why did she think her 15 year old son wanted to watch it at all, nevermind watching it with his mom!

Daryl Hannah has a boy's name. What is up with that?
Posted by Richard of DM at 9:22 AM