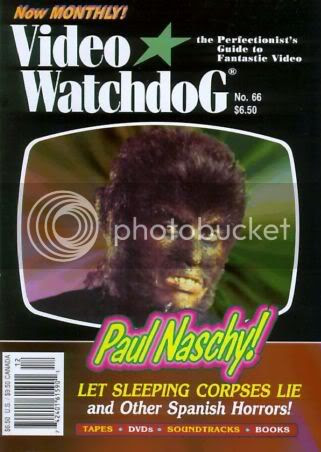 It’s an all out Naschy Blog-a-thon over at Mad Mad Mad Mad Movies and I was very graciously invited to participate. So here I am, trying to think of something to say on this very awesome subject. I wish I could say that I’ve been into the films of Paul Naschy since back in the day but sadly, I can’t. It wasn’t until about a year after my reconnection (“reembracement” is NOT a word, duder) to the world of horror that I found out about Jacinto Molina and his life as a werewolf and other monsters in front of (and behind) the camera.

I’ve had man-crushes before but damn y’all, this is for real. Being that I am a fat, breathless, and weakling loser-face, I am just astounded by Mr. Naschy’s screen presence. The duder was larger than life. His bodybuilding days weren’t too far behind his film career and there are a few films where Naschy is just plain ripped. Let’s face it, the guy was a movie star and the world sucks without him in it. 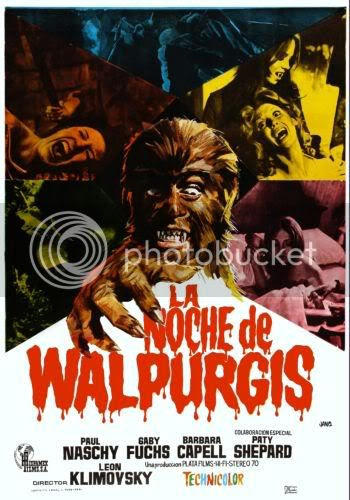 For fans of either 1970s or European horror films, it isn’t long before one stumbles upon something magnificent and cheesy like Werewolf Shadow. This is how I discovered Paul Naschy. And I had no idea what I was getting myself into. Nothing I had read could have prepared me for what I was about to see. Director Leon Klimovsky and his star create a strange and mesmerizing concoction of undeniable atmosphere and straight-faced camp.

Horror Rises From the Tomb was soon to follow. This one is my favorite Paul Naschy film of all time. I’ve watched it over and over again and I can’t shake the feeling that maybe seeing this film is the reason I was put on this planet. Cool, I can die now. Bye bye, everybody. But wait, there’s more. I kind of liked Curse of the Devil but I was a little disappointed the first time around. My second viewing proved to me, not for the first time, that I had my head up my butt. Curse of the Devil rules. Deal with it.

My only speed-bump on my journey down Naschy Street is Crimson. I hate this fucking movie. I bought it because the DVD was cheap and I got rid of it as quickly as possible. Is there a chance that I need to revisit this film? I don’t care. You can’t make me watch it again. No sir, uh uh. It has all the elements for a trashy good time but sometimes a film rubs you the wrong way and there’s no going back.

I was back on track by the time I witnessed Night of the Werewolf and Exorcism. I love Exorcist-clones, so Naschy playing a priest who has to save a young lady from possession is right up my alley. A great movie? Not really. But Exorcism does contain enough cackling insanity and head-scratching plot twists to make any bad film buff happy. Night of the Werewolf on the other hand, is just awesome all the way around. It’s sort of like a remake of Werewolf Shadow but with more blood and hotter women.

Some strange Naschy-ness came to me in the form of People Who Own the Dark. This post-apocalyptic freakout is more about how human beings pretty much totally suck than it is about a bunch of murderous blind people driven mad by nuclear radiation. Paul Naschy plays one of the survivors of the bomb and he is a total dick. When I think of this movie, I always thinks of it as the one where Paul Naschy plays a dick.

Now don’t get me wrong, anti-heroes were this duder’s specialty. Just watch Human Beasts sometime and tell me how in the world are we supposed to like his character? Or Blue Eyes of the Broken Doll; in this Spanish giallo, Naschy plays a friggin’ murderer who can barely contain his strangling desires when he gets aroused by a woman.

Speaking of the giallo genre, Naschy was in the problematic though occasionally entertaining 7 Murders for Scotland Yard where he plays a circus performer who after a “career ruining” injury, takes up drinking and is accused of being a modern day Jack the Ripper. The film is silly and mostly nonsense but the ending delivers. And while I’m on a silly tangent, there’s always Vengeance of the Zombies where Naschy plays an Indian mystic named Krishna. He also plays the friggin’ devil. How bad ass is that? 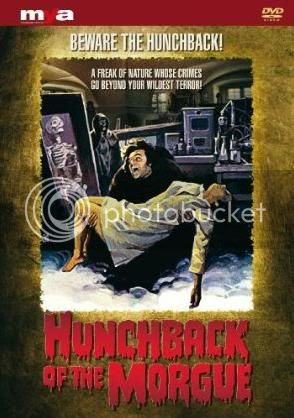 A couple of the more obscure Naschy titles that have surfaced recently, The Hanging Woman and The Hunchback of the Morgue, are the cat’s pajamas. In the former, Naschy doesn’t have a very big part. But he makes the most of it and it’s another atmospheric and odd film for his catalog of horrors. Released the same year is The Hunchback of the Morgue, which is pretty much a perfect part and a perfect performance from our guy. The film is a gory hodgepodge of ideas and Naschy gets the juiciest role as the hunchback in the title, an outcast driven by impossible love and manipulated by evil.

Naschy wasn't content with just playing the werewolf either. He has also played a mummy in Vengeance of the Mummy and a vampire in Count Dracula's Great Love both to great success. Well, "great success might" not be the right term. Maybe he played them both to fan appreciation. Because I friggin' love those flicks. 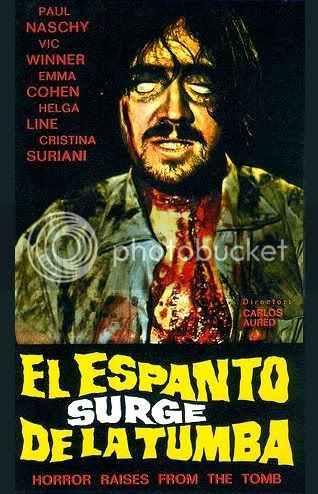 I’ve seen quite a few Naschy films and luckily, I have many more to go. I feel special, like I’m in some secret club that I want everyone to know about. You say you’re not a “Naschy type” of person? You think his movies are overhyped, boring, stupid, or not important? Just keep watching them, duder. And after you’ve seen about 10 or 12 of his films, let me know if you still don’t like Paul Naschy and I just might consider letting you off the hook.

Horror Rises From the Tomb
Posted by Richard of DM at 8:10 PM