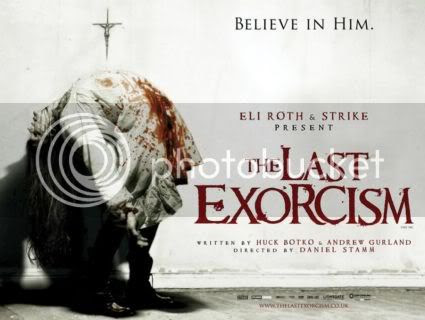 Once again I’ve managed to go and see a horror film in theaters without reading a single review and only watching bits and pieces of trailers and TV spots. When I really want to see something, I go into IGNORANT MODE so I can be as surprised as possible when I set foot in the theater. I was intrigued by The Last Exorcism because… Duh, it’s not The Exorcist. Oh yes, I love possession films so of course, I was down with checking this one out. Oh shit, I just remembered, I still haven’t watched The Exorcism of Emily Rose. I should probably check out that out some time. Anyway, on a windy and hot Sunday morning, I met up with my friends Nafa, Max, and Rod at Veterans AMC 24 to see if this Eli Roth production was worth seeing or not.

The film is about Cotton Marcus (played by Patrick Fabian), an energetic preacher in Louisiana who has been preaching the word of the Lord since he was just a child. He comes from a long line of preachers who have been performing exorcisms for generations to fund the church as well as put food on the table for their families. While going through a crisis of faith, Marcus reads a news story about a young man who was accidentally killed and he decides that it is time to stop performing the rites. He decides to perform one last exorcism in front of a documentary film crew in order to show that his is a fraudulent craft.

Marcus and his crew are called to the Sweetzer farm where widowed patriarch Louis Sweetzer (Louis Herthum) is convinced that his 16 year old daughter, Nell (Ashley Bell), is possessed by the devil and has been killing their livestock. Once all of his tricks are set up, Marcus performs a mock exorcism, collects his money, and leaves. However, at their roadside motel that night, Marcus and the camera crew discover Nell practically comatose in Marcus’s room. They take Nell to a hospital but they can find nothing wrong with her. Things start to go downhill quickly back on the farm and it looks as though Nell might actually be possessed.

I won’t say any more about the plot because I don’t want to spoil anything (until my spoiler paragraph at the end). Despite a few generic ideas and a couple of moments that felt a little familiar, I have to admit I enjoyed The Last Exorcism. It is told in the popular format of the documentary style horror film which is all the rage right now. Personally, I need a break from this style. One thing though, once things got rolling with this flick, my adrenaline shot up and my heart kept thumping until the end. Assuming I don’t have some kind of condition that I should probably be seeing a doctor about, the tale of Nell Sweetzer is a thrilling one.

One thing that Nafa pointed out is the soundtrack. Up until the scary stuff happens, the film has little to no music score. Then some ominous orchestration kicks in. I noticed it but it didn’t bother me. Nafa said that it took him right out of the movie. I must admit that even though I liked the music, the film would have been better off without any kind of music score. The silence to accompany the screaming would have made things much more stark and isolating.

Audience reaction was pretty nonplussed at Veterans 24 and there weren’t any cries for ‘mama’ (Blair Witch Project), people yelling at the screen (Paranormal Activity), or folks running out to puke (Paranormal Activity (though I think that was from motion sickness and not terror). When the movie ended, some guy just went: “Wow.” And that was not a good ‘wow’ either. I hear another lady whisper to her friend: “Well, that sucked!” Most entertaining was this redneck guy there with his mom who was very outspoken. He raised his voice and proclaimed to anyone who would listen that The Last Exorcism is "stupid shit!" and that "The Exorcist was better than this stupid shit!"

In fact, he would get the attention of a female usher to tell her just how he felt about this movie. The sad part is, he left his poor old mother to struggle at getting out of her chair. It took her a big part of the credits to finally bounce her way out of her chair. And this wasn't a big woman either, she just had to use the momentum to get upright. Her stupid son finally got done berating the usher and anyone else in the theater about the film and then said to his mother: "I’ll meet you at the car." What a dick!

The same usher would tell another dissatisfied moviegoer that she wrote and directed The Last Exorcism and that she was personally sorry for it turning out so bad. As for me, I had a good time. Max said he liked it and Rod, well, Rod didn't really say. But I'm sure that he liked it better than The friggin' Collector. Nafa said he thought it was okay but something was definitely missing.

I especially liked Patrick Fabian’s portrayal of Cotton Marcus, the lovable conman preacher who gets in way over his head. Ashley Bell is awesome as Nell Sweetzer. Her performance is quite good, especially when the innocence cracks to show something malevolent underneath. There is a quick shot of her cracking one of the creepiest smiles ever that is just chilling. In fact, there weren’t any bad actors in this movie at all. Louis Herthum also deserves mentioning. The guy nailed the part of Louis Sweetzer, a man torn apart by grief trying to hold what’s left of his family together.

Though flawed, there are other good things going for The Last Exorcism. One is the choice by the filmmakers to keep the CGI down to a nice acceptable level. They could have gone all over the map with blacked out eyes, a mouth stretching open to some unholy, inhuman chasm, and rippling things crawling underneath Nell’s flesh. But they didn’t and that is important. Pacing is good though a couple of the calm scenes felt forced. I doubt that even that redneck duder was fooled by those moments of forced peace. The ending is also a little dicey which I’ll talk more about in the spoilers below. My (almost) final word on The Last Exorcism is that it is not quite as good as I was hoping but it’s very tense, well acted, and pretty damn cool. Don’t expect this to be the scariest film ever made, just enjoy the ride.

I really hope this movie has alternate endings when it hits DVD because the one that played in theaters, though acceptable, has some issues. I don’t think Satanists are scary for millennial audiences. Maybe if this was the 70s or 80s when satanic cults had everybody’s panties in a bunch, this would have worked. Nafa said he immediately thought of the awesome The Devil’s Rain. I, on the other hand, thought of the mostly decent Race with the Devil starring Warren Oates and Henry Fonda. So yeah, I think it was a poor way to wrap things up but it could have worked out better had the ending not seemed so rushed. Truth be told, the more I think about this ending, the more I’m warming to it. I’m going to stop now so you don’t have to read my mental debate.
Posted by Richard of DM at 2:35 PM