Halloween with the Addams Family 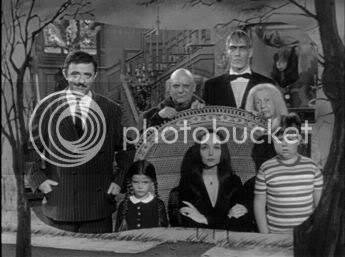 Something amazing happened to me last summer. Target had the first two volumes of "The Addams Family" TV series in a pack for $14.99. LeEtta and I bought them up with glee. I still need to get volume 3 but for the purposes of this post, I can pick it up later. Since the show was canceled in April of '66, there are only two Addams Family Halloween episodes in the original series. 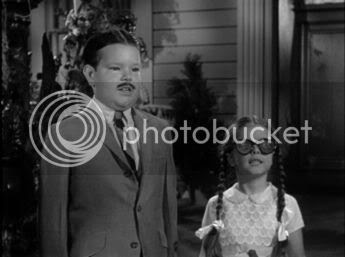 "Do not be alarmed, we are only little children."

In the first Halloween episode, "Halloween with the Addams Family" (which originally aired on October 30th, 1964), The Addams gang mistakes a couple of bank robbers (played by Skip Homeier and Don Rickles) for trick-or-treaters and invite them in to joing in their Halloween festivities. By the end of the evening, the criminals flee from the house and jump into the back of a police car to escape the Addams' Halloween hospitality. The best moments are when Wednesday and Pugsley dress up as normal people to go trick-or-treating and when the bank robbers catch Lurch hiding during a game of hide-and-seek. 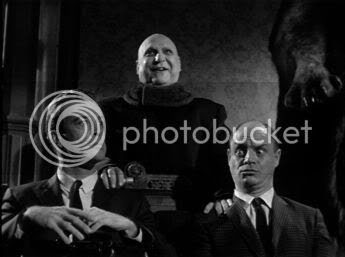 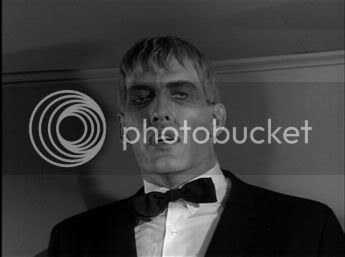 Lurch in his hiding place. 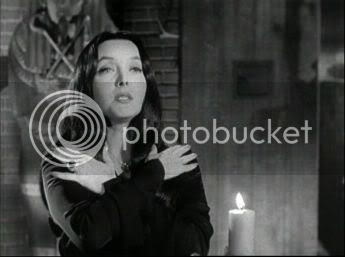 The next and final Halloween episode, "Halloween - Addams Style" (which originally aired on October 29th, 1965), kicks off with footage from the previous year. Once again, Gomez is carving a pumpkin in the likeness of Uncle Fester and later, the two play bobbing for apples on a teeter totter. Thankfully, the stock footage ends there as Wednesday returns from trick-or-treating absolutely heartbroken because she's been told there's no such things as witches by a mean neighbor. Grandmama Addams and Lurch cook up a scheme to convince Wednesday that witches do exist but they screw it up.

The Addams family decide to perform a seance to contact Aunt Singe, a witch burned alive at the Salem Witch Trials. Lurch hides in the next room and pretends to be the ghostly voice on Aunt Singe. When the faux Aunt Singe agrees to make an appearance, Grandmama has to go out looking for a live witch to take her place. Luckily, a lesbian woman and her gay husband (that's my theory, anyway) are passing by on a scavenger hunt. The woman, dressed as a witch, ends up being mistaken for Aunt Singe and has the wits scared out of her by the Addams who are completely convinced she's the real thing. Wednesday is convinced that witches are real and all is well.

There are some highlights in the episode like the appearance of Cousin Cackle and Gomez's use of the phrase "vile canard". Of course, I loves me a seance sequence so bonus points on that one. Lowlights come in the form of the stock footage from the previous Halloween episode. Still worth watching. 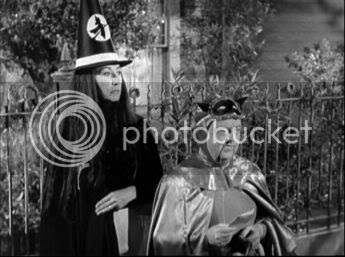 The neighbors. Marriage of convenience?