Yesterday I posted a long monstrosity about seeing Halloween II with Nafa. Well, Nafa is gracing Cinema Somnambulist with his own take on the film. Here's what he has to say: 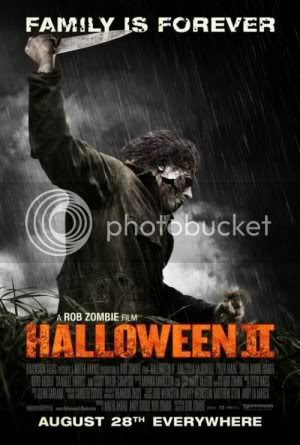 To me, the teaser poster was immediately iconic—it didn’t matter that it made no sense at the time. It was almost as if they used a photo that was second or third choice, not the best or full on facing shot. The poster was little more than a washed out side view of Michael Myers with his knife raised aloft and grass or corn along the bottom of the image, and the words ‘Family Is Forever’ across the top. But from the first second Richard sent it to me I knew there was something special lurking inside.

By the time Richard and I were able to see the film it was my third trip. The first time I was transfixed by how beautiful things were, familial and soft. The second time, I saw more of the gore and sheer brutality, but also became more aware of the dream. The third time was just a complete immersion and awakening. Characters became more familiar and empathy that was absent the first two times was realized.

It was at this third viewing that I realized that every character elicits some sort of individualized emotion or state. And I mean everyone—the avuncular safety represented by Buddy, the filth of Big Lou, and the caution-to-the-wind abandon of Harley, all the way up to the down-to-earth sensibility of Annie, the everyman concern of Sheriff Brackett, and the avarice of Loomis. The list goes on. Since every supporting player in the film emotes such a unique feeling this allows the three/four main characters to work as blank slates. Mother Myers is family, a phantom of promise and intangible. Young Michael is hopefulness and innocence, the novice. Laurie is a conflicted, unsettled sea of raw emotion and a lack of identity (which is only further exacerbated by later revelations). And masked Michael is the device, the non-judgmental rage— a machine.

Michael’s vengeance has never been perpetuated by any one particular thing or another. Jason Voorhees was moved by revenge for his mother and an almost holy quest to smite the sinners in action. Leatherface was a sort of ‘live to eat, eat to live’ creature. Freddy’s vengeance was aimed at the parents who killed him. But Michael, though having an impetus for his killing, has always seemed to be sort of a wind-up robot with a knife, wound and moving forward in a swath of rage, killing anything and everything in his path. He never went out of his way to kill, he was just moving from point A to point B and clearing a path along the way.

For Laurie Strode, Halloween II is a coming of age film. It’s an awakening, a step from reality to dream to reality to dream, the lines beautifully blurred and the scarred. It’s Alice In Wonderland being chased by blades into the mouth of Hell, but Hell is where she needs to be in this film.

There is lots of debate as to how much of this film is a dream, who did the actual killing, and what exactly is real. I like not having the answer. Accepting that fact is quite nearly as disturbing as the characters in the film are. This is truly one movie that brings the thoughtful viewer a tangible taste of the madness.