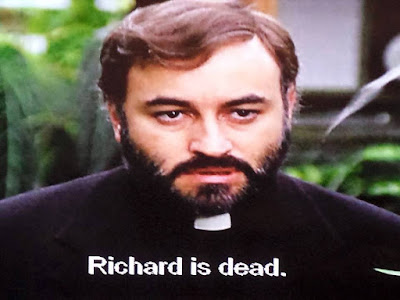 So here we are in the 10th year of DoomedMoviethon.com and the site is down. Apparently, the web-hosting company I've been throwing money at for a decade is gone. Woops! Instead of screaming to the heavens and eating a bag of my own intestines, I'm taking this as an opportunity to revamp the old girl. The next time DoomedMoviethon.com is ready for your eyes, it'll be way hotter with some new content and a celebration of all the old stuff that's been what the site has been about all along. Apparently, people still like horror and cult movies! And double apparently there are some of you out there who STILL LIKE Doomed Moviethon! Thank you for that!

Speaking of recycled content, I wanted to announce right here, right now that I've been putting together another book. Say what!?!?! Yep, that's right. It's called Cinema Somnambulist and it's a collection of my writings on movies from this very blog and the aforementioned DoomedMoviethon.com. There's going to be approximately five chapters. All of my Franco Fridays, all of my nostalgic crap, and a bunch of Eurohorror and Asian horror stuff will be represented, just to name a few.

There will be very little material that is unique to the book but I really wanted to collect all of these pieces in one place just for myself. Then I thought, hey maybe some folks would like a copy too! Nice ego, Richard. But since it's a selfish exercise, I'm going to make the print as cheap as possible and offer the Kindle version for super cheap as well. Rest assured that Cinema Somnambulist is a passion project and not an empire-building money machine like everything else I do. Wait, what? Anyway, I hope you will enjoy it.