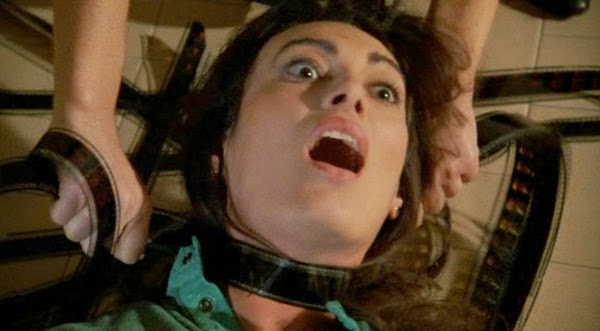 Even though the giallo genre continues, albeit very shakily, to this day, I've always felt that the boom was OVER by 1974. I'm not happy about that but I find the gialli post-boom era extremely interesting. Some territories must have been craving bloody mystery films or else these films would have stopped forever. Here's a list that I threw together because lists are the essence of blogging.

“This is all the whiskey that you possess?” is my favorite line from a giallo ever and that alone lands this film on my list, even if it is the last spot. Lamberto Bava (or “Lambava” as Brad and I call him) really nailed this claustrophobic, atmospheric, incredibly violent, and wacky film. The English dubbing is gloriously cheesy and all of the female characters are weirdos. The score by Guido and Maurizio De Angelis is ethereal and haunting. What keeps this film so low on my list here is that it is definitely a little too long at 109 minutes.

Of course, I already know that I’m going to be putting too much of one director on this friggin’ list, I A lot of people dog this movie but I straight up love it. Argento’s second attempt at conquering the American market (the first being Two Evil Eyes) certainly worked on me as a teenage person. I found this film haunting and thoroughly strange and in some ways it still is. In other ways, it is insanely stupid and melodramatic to the point of hilariousness. The whole bit about anorexia will have you shaking your head at this film’s clumsy attempts at tackling a serious issue. I’m not sure if I can recommend this film to you unless you are 16 years old and me. You have to be me.

This is a strange, slasher-esque, and rather obscure one that Brad recommended to me and I was glad when I finally got around to it. This one really gets under your skin and features some excellent disco music and oddball characters. You will probably be scratching your head just like I was by the incredibly abrupt ending. At only 78 minutes, you can’t go wrong with a bunch of strange dudes and gorgeous actresses being stalked in a creepy old house. I can’t wait to re-watch Trhauma. Yep, that’s how they spell it.

When it comes to baffling movies, you would be hard pressed to find one more outrageously bizarre than what I consider Argento’s last truly great film to date. I will never forget being totally floored and genuinely shocked by The Stendhal Syndrome when I first saw it many years ago. I went into it only having seen a couple of Argento’s films and oh man, I was totally unprepared for this insanity. An incredible score by Ennio Morricone coupled with intensely beautiful and wildly brutal visuals make for a wonderful mix. I suggest multiple viewings of this one.

When it comes to Fulci’s masterpieces, this is Fulci’s masterpiece. As you probably have already suspected, I am a fan of Lucio Fulci and his gialli are very near and very dear to me. If you’ve only seen the director’s gorier efforts like The Beyond or City of the Living Dead, then you absolutely must behold this masterful giallo. This film is a death circle that just keeps going around and around and around and the music by Bixio/Frizzi/Tempera is some next level shit. You gotta get on this.

Oh Riccardo Freda, you magical bastard! I didn’t even realize this was a giallo until my third viewing. There is so much gothic freakiness packed into this little gem that I was just bewildered. The more I watch Murder Obsession, the happier I become in my life. Anita Strindberg’s last movie? And it’s a doozy too. Fake bats, fake spiders, out-of-body experiences, a chainsaw, ghostly recordings, religious symbolism, Laura Gemser (not my cup of tea but you know, whatever), a Satanic cult, adultery, etc. Get off your ass right now and then go and sit on your ass and watch this movie.

When someone says to you, “What in the damn hell fuck is a giallo, anyway?” Show them this film. I can’t stress enough how important this film is for genre fans. If you only ever watch one giallo then make it this one. I’m serious. Umberto Lenzi made an entertaining, trashy (but not sleazy), and goofy movie that gets better with every viewing and is just fun to watch with giallo-newbs. I still prefer Seven Bloodstained Orchids but this is a very close second. Where the hell is the Blu-ray?

Don’t even get me started with this one. If anyone talks any smack about Pupi Avati, I swear I will pull a knife and start some shit. When it comes to injecting some class into a classless genre, look no further than this film (or –sigh- Short Night of the Glass Dolls (if you insist)). The dread packed into every frame of this lush period piece never fails to have me on the edge of my seat. Art and the obsessive search for the truth aren’t just themes in this film, they are cosmic forces playing against the main character and it is a horrible joy to watch. Brilliant.

I’m kind of surprised to see this at the number one spot on my list. I’ve never cared for this movie. It is too sedate, too artless, too generic. Of course, I’m kidding. Argento got cold feet and decided to screw his fans out of a Three Mothers film (for 27 years) after Suspiria and Inferno by dropping this giallo bombshell on the world. If you wanted to say something to the effect of: the genre died here. Go on, you can say it. Argento straight up killed it to death with Tenebre. This film is truly deranged and over-the-top. Tenebre will trample you with style and leave you wanting more. I need to watch this again right now.