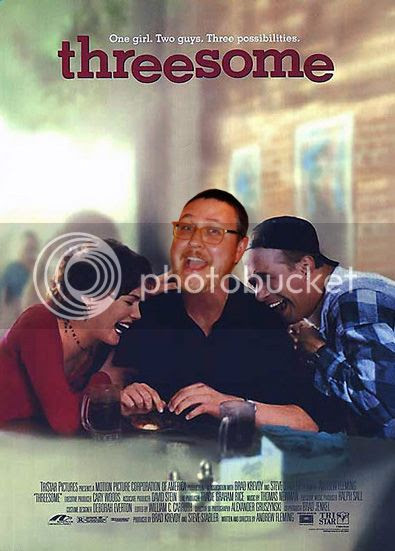 (Thanks for the art, Nafa.)

When I decided to put together a list of every movie I saw in theaters during my senior year of high school, I thought it was going to be this huge list. Then I remembered that I spend many, many nights going out to see bands play. Damn you, ska music. Damn you to hell. Look at what you did to my cinematic life. I'll never get that time back. Boo hoo. Maybe I'll expand this one day to cover all of my high school movies, rentals included. Maybe. So anyway, here's what I say IN THEATERS during that wonderful 9 months. Enjoy.

Believe it or not, this was a first date with a girl I was dating at the time. I was a virgin to the Rocky experience, so I got humiliated on stage for my date and her weird friends who had all been there before. Of course, I loved the whole atmosphere of the event but I still think this movie should be watched alone not with a group of people. They might see you cry when Columbia dies. More on this.

This was an odd night. Believe it or not, the same girl I saw Rocky Horror with also accompanied me to see this trash. Our relationship lasted two weeks. Two glorious weeks. I re-watched this one recently and I couldn't believe how forcefully sleazy this is. Was anyone really offended by this shit? Does anyone even remember it?

Talk about crowd pleasers! I saw this flick probably on opening night with a theater full of people that were lovin' what Stallone and Snipes were dishing out. And surprisingly, this film has aged pretty well and is still a lot of fun unlike the hideous Judge Dredd.

This movie had a brilliant marketing campaign. Let's take all these rockers and team them up with all these rappers for the soundtrack. Brilliant! Oh crap, why is the theater empty? I do remember enjoying this film (and being one of the only people in the theater) but the real draw was the soundtrack. Rap and rock... Who knew? So revolutionary.

I gotta tell ya, I really love both Addams Family movies. I was horrified and wanted to crawl under my seat when MC Hammer's contribution to the soundtrack was pumping throughout the theater. The phrase "What the fuck am I doing here?" did fade thanks to the comedy. And this film is a grower, damn it. My wife and I watch this a lot.

Penelope Ann Miller? Ugh. Al Pacino? Argh. Now don't get me wrong, I thought this movie was so great when it came out. It's good shit and I'd probably enjoy it now. But honestly, Penelope Ann Miller's character in this is so infuriating. And I can never go back to liking Al Pacino. I just can't. I'd rather watch Addams Family Values again. Sorry.

I remember literally one thing about seeing this film and that's me saying: "One for Pelican Brief, please."

This is complicated. I went and saw this with several friends. We were all pretty ruined by this very sad and moving film. Our gay friend was particularly freaked out and understandably so. This was the first Hollywood film (of my generation at least) to say, "Hey everybody, AIDS is real." So the funny part about seeing this movie is my friend really hated that "Streets of Philadelphia" song by Bruce Springsteen so we were heckling the song. Just the song. Not the movie. Ah whatever, I'm going to hell.

I wanted to like this so much. I was 14 or 15 when the first Wayne's World came out and it became one of my all time favorites. This film had a couple of funny moments but was just a hideous Aerosmith commercial.

This was pretty much a total riot from beginning to end. The moment Ace Ventura -disguised as a disgruntled UPS delivery guy- steps into frame, it was magic. Looking back on it, I could say something like "Oh, I was just immature. Of course that kind of a movie would appeal to me." But you know what? If I watched this now, I'd still crack up.

I hated this movie so much that I got up, walked out, and bought a ticket for...

Yep, that's right. I walked out of Reality Bites and right into Schindler's List. It had been a bad night. I had a first date with a girl who told me to take her home less than an hour into the date. So at least I finished with a powerful film experience. I saw something bigger than my sheltered, suburban experience.

What the fuck? Why did I go see this? Only the sheer boredom of youth could explain this bullshit. Or maybe I rented it. Dunno.

This was a major, major disappointment.

I didn't actually see this until after graduation so technically I'm cheating a little here. I was visiting relatives in Great Falls, Montana and managed to catch this at the town's only theater. Even though I never got paid to be a babysitter, I was looking after some younger distant cousins ON MY VACATION and ended up watching this damn garbage.

Saw this at the dollar theater and loved it. Ray Liotta, what happened? Anyway, I bet this movie is still awesome.

Here's another dollar theater viewing that was quite funny. I haven't seen this since this first viewing but holy crap, at the time, I loved this movie. I remember yelling at this judgmental bitch who flipped out during the threesome sequence. She seriously was like "Oh my God! How can they show this?!?!" and I told her to shut the hell up. It was the 90s and I considered myself a very tolerant human being. I also had a huge chip on my shoulder. I once yelled at a guy for having his kid on one of those kid leashes but that's a different story.

I saw this with my high school girlfriend. We were together for six whole months! That's marriage in high school terms. Anyway, I took my feisty lady to see this, the most emo-goth friggin' movie ever filmed, and she melted like butter. We were -I wish I was kidding- crying and declaring our undying love for each other the rest of the night. Sigh.