My good friend Brad Hogue watched a whole mess of Naschy. Here's what he had to say about it: 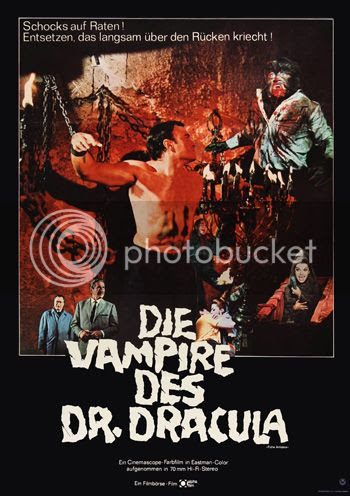 I recently watched Paul Naschy's Waldemar Daninsky El Hombre Lobo series of wolfman films from 1968-1980. Friday night we watched Mark Of The Wolfman, Assignment Terror, and Fury Of The Wolfman. Saturday we wrapped up with Werewolf Shadow, Dr. Jekyll And The Wolfman, Curse Of The Devil, Night Of The Howling Beast, and Night Of The Werewolf. We watched them in chronological order according to Wikipedia (dates differ on different sites.) PLEASE NOTE: There are some minor spoilers ahead.

Seeing these films back to back for the first time has led me to a conclusion that I hadn't really formulated before. Naschy never told a simple werewolf-on-the-rampage story. He didn't remake The Wolfman over and over. In fact, he never remade The Wolfman at all. Naschy's interest was with Frankenstein Versus The Wolfman and a love of the monster rally films from the 40's. There is plenty to say about these films but I want to focus on some of the different 'monsters' in the films.

In 1968's Mark of The Wolfman (also known as Frankenstein's Bloody Terror) you have him being bitten by another werewolf but it's not the story of him trying to be cured by itself; you have the introduction of two vampires. 1969's Assignment Terror has aliens, a vampire, a mummy, and a Frankenstein's monster variant. 1970's Fury Of The Wolfman includes suspect pseudoscience, a female werewolf, plant people, insane hippies, and a Phantom Of The Opera-style masked madman. Later the same year Werewolf Shadow showcased Daninsky vs. Countess De Nadasady, a vampire stand in for Countess Bathory, and a zombie monk. 1971's Dr. Jekyll And The Wolfman features not a showdown between Daninsky and Mr. Hyde but Daninsky being a wolfman AND Mr. Hyde. 1972's Curse Of The Devil, perhaps the closest Naschy comes in this period to a wolfman-on-the-rampage film, still manages to include a gypsy curse and an axe murderer. 1975's Night Of The Howling Beast folds two cannibalistic, vampirish sisters, a fradulent witch in the employ of a bandit warlord, and a yeti. 1980's Night Of The Werewolf is a remake of sorts of Werewolf Shadow with Daninsky facing off once again with Countess De Nadasady and a bevy of vampires.

The Daninsky series is both reflective of the times and contain throwbacks to earlier styles and genre filmmaking. Mark Of The Wolfman could be seen as a Hammer style horror film while Night Of The Howling Beast is a pulpy, serial style film. Werewolf Shadow is a fun, fast paced film whereas Curse Of The Devil is a more somber period piece. It is a testament to Naschy that he was able to write screenplays that fit into many different sub genres. Perhaps that versatility, his love of the genre, and his strong screen presence were major factors in the longevity of the series.

My wife and I compiled a list of our favorites based on only this viewing of the films.