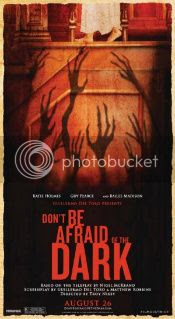 Even though I wasn't very impressed by the trailers for Don't Be Afraid of the Dark, something told me to get up early enough on Sunday to catch the matinee. I guess what worked was the moment where Katie Holmes rips down a dusty sheet to reveal a mural of some rather demonic-looking creatures with arms outstretched, hands clutching and promising perpetual torment. So yeah, that was enough to make me go 'Oh snap, that's in theaters already? I'm on my way, bitches!' I probably didn't say that in my head or aloud but still, I did go to the movies. As usual, I went to AMC Veterans out on Anderson to catch the show with a small, not very enthusiastic crowd. Shit, at least they were quiet. There was a redneck lady with a baby that came in and I keep thinking that she was dragging it around by the leg like a sack of potatoes. But I might be imagining that...

This film, co-written and co-produced by Guillermo del Toro*, is about a girl named Sally (played by Bailee Madison) who is sent to live with her father and his new girlfriend. Her dad Alex (Guy Pearce) is an architect restoring and living in a place called Blackwood Mansion. His girlfriend Kim (Katie Holmes) is an interior designer helping him out and, you know, having SEX with him. Alex isn't exactly the most attentive father in the world and after being dumped by her prescription-drugs-cure-everything mom at the doorstep of a creepy mansion, Sally isn't exactly the happiest kid in the world. She ignores her father, despises Kim, and retreats into the grounds and the dark corners of the Blackwood Estate.

Almost immediately, Sally begins to hear voices that claim that they want to be her friend. These voices belong to tiny creatures living in the walls of the house. And though they sound benevolent, these diminutive beasts are ancient monsters who must feed every couple of centuries to survive. Oh and they like to eat children's teeth! As more and more strange incidents occur, Alex reacts the way any parent would act and calls in a psychologist to analyze Sally and prescribe something very strong to calm her down. After a trip to the special collections department of the local library**, Kim discovers that Sally may not be going through her tiny-monster-phase at all. Heck y'all, there might just be something to that little whipper snapper's story!

Don't Be Afraid of the Dark is no throwaway summer horror flick. This is NOT some found footage gimmick flick or a Saw clone. It's an old school horror film that is surprisingly well made. The score by Marco Beltrami and Buck Sanders stands out as some of the best horror film music in recent memory. The sets are phenomenal as are the Australian(?!?!) locations which look a lot like freakin' New England to me. The cast is solid with even Katie Holmes in a likeable role (I understand that she is an acquired taste to most movie lovers' fickle palates). And the sense of dread established in a horrifying prologue is balanced with enough childlike wonder to keep the viewer on their toes.

The only things I don't like about this movie are the shrill screams of the little creatures. I know that a small army of evil little gnomes (or whatever they are) could be a little silly as a threat but I wish there had been another way to make them intimidating other than giving them a high-pitched screech. Or perhaps the filmmakers could have used that sound sparingly or in a different way. Keep in mind that this is a coming from me, a guy who digs loud, abrasive experimental music; so you'd think I'd just be snapping my fingers and grooving along every time that sound ripped through the theater. Well, I wasn't! Despite the auditory annoyance, I did really like the design of the creatures.

I am going to go ahead and call this a 'must see' because the thing about Don't Be Afraid of the Dark is that it made me proud to be a horror fan. It is a classy production with excellent atmosphere, a dark fairy tale vibe, and is a film that I predict will age very well. The story is not exactly new (this is a remake after all) but it is told with confidence and for people unlike me, who haven't seen a thousand friggin' horror films, will eat this one up. What was that sentence anyway? Look, go and see Don't Be Afraid of the Dark. It's good, smart stuff and it will very likely give you the heebee-jeebees though I'm not sure that it earns its R rating.

*I read some debate about how much the horror/fantasy director had to do with this film but after seeing it, I have to say that the stamp of del Toro is pretty obvious.

**High fives to my librarian homies.
Posted by Richard of DM at 7:00 AM