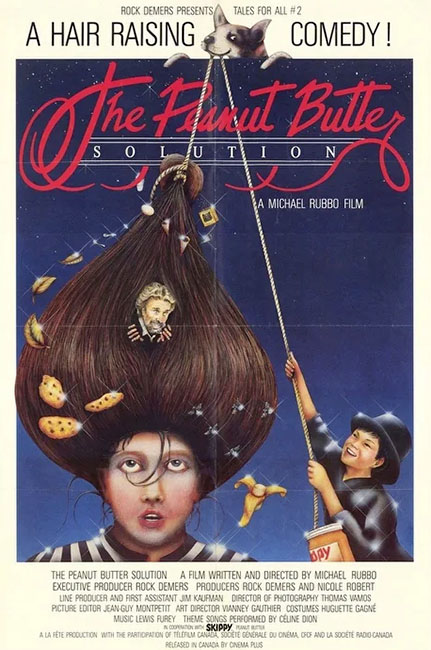 After witnessing something terrifying in a burned out, abandoned house, a kid named Michael loses all of his hair. After a few days of hiding his baldness under a ridiculous wig, the ghost of a homeless woman who died in the fire takes pity on him and shares her magical recipe for hair growth. Of course, he royally screws up the recipe and it ends up working all too well. When a mysterious villain takes notice of his crazy hair growth and is determined to profit off of it, Michael has to face his fears to solve this hairy situation.

I was the perfect age for The Peanut Butter (1985) when it came out in theaters, but I probably saw it back when it debuted on TV. The whole premise of this film frightened me back in the day. Then the body horror of the utterly impossible hair growth kicks in, and that scared me even more. The other thing I remembered about this one is being very disappointed at the end when it's revealed what Michael saw that inspired his baldness.
Revisiting The Peanut Butter Solution now... Well, I kinda love it! This is an excellent kids movie made with a lot of imagination, a bizarre sense of humor, some whacked out fairy tale logic, and an infectious enthusiasm. I do wonder how kids who lost all their hair in real life would feel about this flick. Yeah, this probably would go over like a lead balloon in that situation. Anyway, I just adore the eccentric characters like the deranged art teacher, the prodigy sister, the best bud who carries a dead ant around in a matchbox, the homeless ghosts, etc.
If you're looking for an odd kids movie that is also hyper-Canadian then congratulations, you've found it! The film was beautifully shot by Thomas Vámos, who was the cinematographer on The Gate (1987), so you just know this has some atmospheric moments packed into it. This film also has one of the most insane subplots in a kids film ever as Michael's friend foolishly uses the hair growth formula on his downstairs area. Yep, they went there.The out-of-control hair growth reminds me of the crazy hair thing in Asian horror films. Unfortunately, The Peanut Butter Solution doesn't end like Exte: Hair Extenstions (2007).
Posted by Richard of DM at 12:21 PM