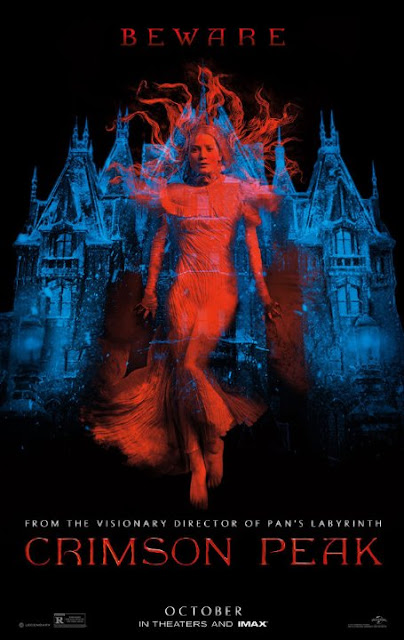 Mia Wasikowska plays Edith Cushing, a Turn of the century lady (that's the 19th Century, BTW) who's struggling to be taken seriously as a writer. Her industrialist father (Jim Beaver) entertains a business proposal from Thomas Sharpe (Tom Hiddleston), a nobleman who is trying to make his fortune in the mining industry. Edith overhears Thomas's appeal to her father and the board of directors and is quite taken with the man.

As romance blooms between Edith and Thomas, much to the chagrin of Edith's father and Thomas's overprotective sister Lucille (Jessica Chastain), a terrible tragedy "coincidentally" occurs sending her rushing into marriage. At the family home of the Sharpes, Allerdale Hall, all is not well. The place looks like a Charlotte Brontë fever dream only not as structurally sound.

Oh and there's ghosts! When Edith was a young girl, her mother died and came to visit her after the funeral to give her a warning, "Beware of Crimson Peak!" This encounter makes Edith just a tad more open to supernatural experiences than your average person. The moment she sets foot in Allerdale Hall, she is besieged by spirits that are all pretty pissed off. What do they want? Who were they? These questions and more will be answered this season on Crimson Peak!

As the month of October is coming to a close, I realized that I hadn't been to see a horror movie all damn month. And that was probably because everything but this looked like shit to me. I desperately didn't want to miss Crimson Peak on the big screen. Thankfully, the new place around here, Studio Movie Grill, is close to work and the wife and I could easily catch a screening right after work. This place used to be the Regal University 16, the legendary theater glorified in my account of Nafa's and my Halloween II experience back in 2009 (read it here).

I only have two negative criticisms for Crimson Peak; one is rather slight and the other a bit more annoying. Heck, they might even be tied together, at least they are in my deranged mind. The first thing is, I feel like the setup leading up to Edith getting to Allerdale Hall and falling for Thomas Sharpe should have been longer. Period pieces are slow and the good ones are achingly so. Thanks to my wife, I have seen A LOT of Jane Austen adaptations, some of them 4 hour versions and that length lets you settle into a story thus making the small emotional moments have a huge payoff. I realize that asking for a horror movie that is one minute short of two hours goes against every molecule of my being but damn it, this is a gothic horror film and I wanted more.

The second thing is the acting felt pretty stiff in spots. I don't want to harsh on this point too much because I'm hoping a second viewing of Crimson Peak will help me change my mind. Would I have been more invested in these performances had the movie taken it's time a little more? Probably not. I did care what happened to these people and I did get wrapped up in all the gothy melodramatic business but something is nagging at me. The one person who really bothered me was Jim Beaver. His portrayal of Carter Cushing really left me cold. He needed to be a bit more gruff or drunk or pissed off or jolly -shit, I don't care- just more something.

Now that that nitpicking is out of the way (see, only two paragraphs!), let me gush for a bit. Guillermo del Toro has never let me down and Crimson Peak is no exception. This film feels like 1. A love letter to the Hammer horror films of the 1960s, 2. A knowing nod to Mario Bava fans, and 3. A full on manly makeout session with Henry James. I've only read a few of James's works but I get the impression that he liked to kiss dudes, hard. The eerie atmosphere, beautiful set design, and magnificent lighting are paired with surprisingly brutal violence and monstrous apparitions making this a real treat for horror fans.

What makes this some next level shit is that Crimson Peak is kinda smart and it made me want to talk about this movie immediately after it was over. del Toro tells you what is going to happen early on and when it happens, your brain goes, "Damn it! I forgot about that! I'm not as smart as I thought. Blast these spectacles and useless vest!" Okay, maybe that's just me. I notice that this film has a slim chance of making its money back and I really hope it does because I want more classy, lush, and thoughtful horror films like this. Recommended. And -BONUS!- it's a great date movie.