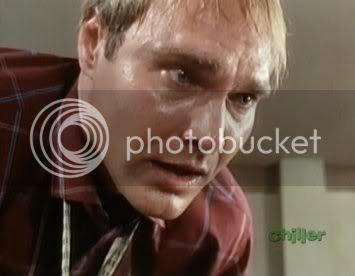 A man named Arnold Barker (Sherman Howard) wanders into a US Army recruitment office asking for sanctuary. Two loser recruiters (played by Anne Lange and Leon Russom) are excited when they discover that Arnold is a floater. He claims to be "The Human Balloon", an escaped slave from the circus who now needs the Army’s help because evil circus people are after him. After demonstrating his floating powers, the recruiters agree to give Arnold sanctuary if he agrees to join the Army.

Of course, Arnold's tale is a big pack of lies. This floating asshole is actually escaping from a young woman he impregnated and her shotgun-toting pa. He started floating 6 months earlier when Betty Ann Cooper (played by Yeardley Smith) told him that she with child and suggested they get married. With her father’s shotgun pointed at his face, Arnold agrees to marry Betty Ann and he stops floating. But he isn’t out of hot water just yet. It seems that this lecherous bastard has just one more lesson to learn.

I think this is one of the strangest Tales from the Darkside episodes in the entire series which is probably why it has been stuck in the back of my mind for the last 23 years. What is this supposed to be about exactly? Is this a morality play? If it is, the message seems to be that if you’re a douchebag, you’ll float right into a killer ceiling fan.

Arnold describes floating uncontrollably as one of the most horrible superhuman abilities one could have. Well, it can’t be worse than making a baby with Yeardley Smith. I really dig this episode though my lying brain remembered the climax as being much gorier than it actually is. Instead of guts flying everywhere, there’s just a little blood. Let the imagination do the rest.

“You can float straight to hell, Arnold Barker.”