I keep thinking that the Franco Friday series is over. I know that I’ve only seen one quarter of Jess Franco’s films and there’s still greatness to be found if I keep scavenging. But honestly, I’m still fried from the last time I jumped in. And as usual, I have so many other fun things going on that this project seems like it might be officially dead. Then, out of the blue, I find ANOTHER Dr. Orloff film! Wait what? How did that happen? Well, gang, here I go again. Let’s see what old Orloff was up to in 1984. 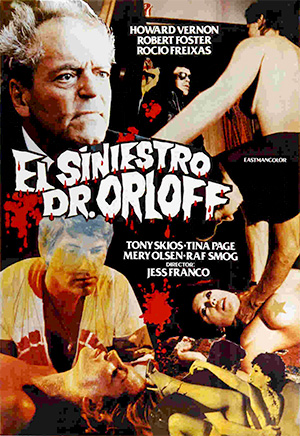 Dr. Orloff’s son Alfred (Antonio Mayans) is pining over his lost love who also happens to be his dead mother Melissa. He keeps her body preserved so that he can revive her someday. Alfred needs the bodies of young and sexy women to make this terrible dream come to life so he sends his blind assistant Andros out to kidnap him some raw materials. Meanwhile, Inspector Tanner (Antonio Rebollo) is feeling the pressure as he hasn’t been able to crack the case yet. His lovely wife Muriel (Rocío Freixas) wants to help so she gets mixed up in all this craziness too. This should turn out great for all parties involved.

As I was watching The Sinister Dr. Orloff (not to be confused with one of my favorites, The Sinister Eyes of Dr. Orloff), I thought to myself, "Could this be a nice throwback to his early 70s goodness?" The answer is yes. This kind of meandering pervy crap is exactly what I was hoping it would be. Not only are characters recycled from this storyline that Franco remade over and over again, the plot as well will be very familiar to fans of this disjointed series.

Antonio Mayans fans, rejoice! He is pretty frickin' great in this film. Alfred is a really, really pathetic male chauvinist psycho dickhead and his narration while he’s cruising the streets with his robotic manservant is as lame as it is hilarious. Howard Vernon is back as the original Dr. Orloff and he looks truly insane in this. His hair was styled during a nuclear bomb test and his character spends the movie in a wheelchair trying to talk Alfred out of his insane plans. Jess Franco himself plays a ridiculous gay stereotype who witnesses one of the abductions. Lina Romay does some voice work but unfortunately doesn’t play a character onscreen in this one. Rocío Freixas is very cute and all but she's clearly standing in for Romay. She even looks like she's borrowing Lina's blonde wig!

The Spanish seaside locale is beyond beautiful and there’s some very familiar looking architecture on display (see Countess Perverse). This gets predictably trashy as there’s plenty of utterly gorgeous female flesh on display but it only goes for extended onscreen sex once. Color me relieved. The real sleaziness happens when Alfred strangles one of his victims -who is EXTREMELY nude- to death and he seems to be really, really enjoying it.

The Sinister Dr. Orloff is a wonderful overdose of mad science, off kilter dialog, and jiggling boobies (and other body parts). It’s good but definitely not essential for Franco fans but there’s a whipping scene if you’re into that kind of thing. There's also endless shots of Andros carrying naked women over his shoulder which I think is a fetish as well. The synthesizer music at the beginning is very subtle like a supernova smoking crack. Come to think of it, all of the music in this film is pretty deranged; and surprise (not really), it’s all done by Franco under a pseudonym! My only major complaint about this one is that I really wish it was dubbed into English but I highly doubt this film got very much distribution beyond Spain.

“You can’t atomize the soul of a human being.”