Fulci on the Big Screen! 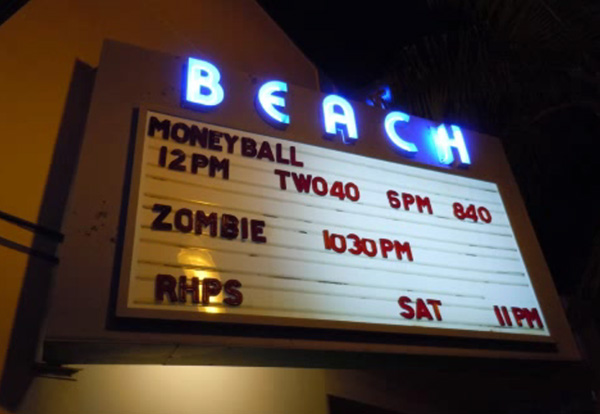 In the fall of 2011, I saw on some website or other that Lucio Fulci’s Zombi 2 (1979) was going to be making the rounds at theaters around the country. This news flipped me the fuck out. The thought of seeing The Fulch on the big screen really had me chomping at the bit. The closest that Fulci’s classic was playing to LeEtta and I was in St. Petersburg at a place I didn’t even know existed called the Beach Theatre (now closed, apparently). It was our anniversary so we decided to take a couple days off and stay at a hotel near the theater as well as attend the screening.

We arrived at the Beach Theatre about 5 hours early for the show just so I could scope the place out. I was a nervous wreck just expecting the whole night to be a disaster so this was the only way I could calm down with so long to wait for the movie. Then LeEtta found a little German restaurant that was completely empty save for us. The sole waitress was really confused by our presence and handed us the menus with much trepidation. We made her at ease once we started ordering some of the more traditional German items off the menu. The poor thing was probably hoping we’d bail after getting a look at the selections. We had a great time.

Even after eating our scrumptious meal, there was still a lot of time before the movie so we walked around St. Pete and hit up an ice cream store as it was closing. Outside the theater, I saw a guy in a horror movie t-shirt and started up a convo with him. He was a really nice guy and I feel kind of bad because I can’t recall his name. Sorry, duder. Message me!

When it was time for the film to start, we went in and I was a little bummed that the whole event wasn’t better attended. Don’t get me wrong, the Beach Theatre (which opened in 1940) couldn’t have held a massive crowd but only about half of the seats in the theater were filled. We picked our seats and we were immediately struck at what terrible shape they were in. The armrest between LeEtta and I broke off and she spent some time trying to put it back into place.

The moment that made me realize that the year was 2011 and not 1979 was when the movie started on the big screen but it was over a minute into the film. The projectionist tried to start the film over and that’s when the Blu-ray player’s menu flashed on the screen. My heart sunk. I guess you could call me naïve but I was pretty shocked that I was going to be seeing Zombi 2 from a goddamn Blu-ray and not on actual film. All bitching aside, the movie looked AMAZING on the big screen and this is one of the moments that convinced me to buy my first Blu-ray player.

The crowd was pretty sedate. No one dressed up like zombies and no one came in smoking pipes full of maggots or anything. There was one guy who showed up drunk with his lady friend. He was tall and lanky and made a big public display of affection for his poor companion as though someone there was questioning his sexuality. They served beer at the Beach Theatre and he was partaking.

When the big splinter to the eye scene happened, this loud goofus started cheering and drunkenly clapping. He was actually offended when he looked around and no one else was going along with him. It just wasn’t the crowd for that and I didn’t hold that against him. Before the end of this movie, he had to leave very quickly nearly falling over several times while his girlfriend ran alongside trying to steady him. I’m probably lucky that he didn’t puke or fall right on top of me.

When all is said and done, seeing Zombi 2 on a big screen with a modest-sized crowd was a huge deal even taking my minor complaints into account. Much like my lame Dawn of the Dead experience, the use of a DVD or Blu-ray for a film screening seemed like this huge letdown at first. But you know what? The power of the films I love transcend millennial disappointment. The miasma of horror that Fulci has shoved into the eye sockets of film audiences can be delivered by a laser very efficiently.

Here's my old (and 50 pounds heavier) vlog about the event.