And we're back. So my wife and I are kind of watching but mostly re-watching all of Elvis's movies. I'm going to be randomly reviewing them as we go along, especially when they are weird or just very, very special. Check out Part 1 if you missed it. 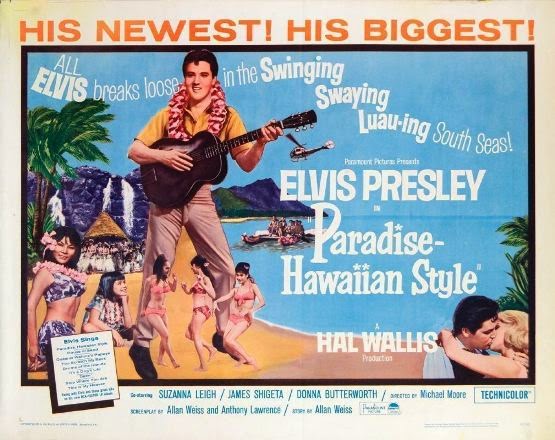 I've never taken a Valium before but I believe that Paradise, Hawaiian Style from 1966 is exactly what it feels like to take one, maybe. In this nearly plotless travelogue, Elvis plays Rick Richards, a pilot fresh out of the Air Force that starts an island-to-island helicopter taxi/sightseeing service in Hawaii with his pal Danny (played by James Shigeta (Die Hard)). Of course, Rick is a horny fool with a girl on every island and pretty much screws up everything. And there's a love interest in the form Suzanna Leigh (Lust for a Vampire) and a goofy kid character as well: Danny's daughter Jan (played by Donna Butterworth).

Rick's other love interests are irritating at best and are played by Marianna Hill, Irene Tsu, Linda Wong, and Julie Parrish. They act sexy and then angry. There you go. Hill gets the most screen time but her character is such a jerk that you just want to beat her to death with a cocoanut. Fans of obscure horror films, like myself, will slap their foreheads with this bit of trivia: Marianna Hill starred in the weird and wonderful apocalyptic zombie film, Messiah of Evil in 1973.

An air hostess (that's what they called them back then!) says the title of the movie in the first 2 minutes.

Elvis flying a helicopter with a pretty girl and a cockpit full of mentally disturbed dogs.