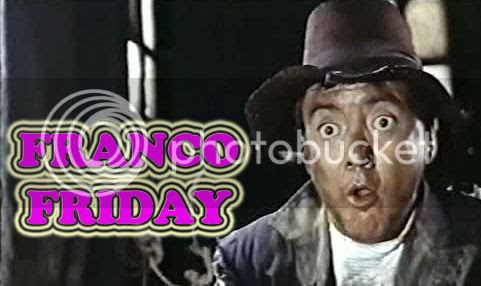 I was gonna review Mansion of the Living Dead but you know what? I don’t need to see Lina Romay burying her face in a woman’s -you know- gothic cavern. So fuck it, I’m gonna review a Fu Manchu movie even though I don't think I'm going to like it. Hey, it’s October. Happy Francoween or whatever. Aren’t you glad you read my blog? Well, I’m glad you do. 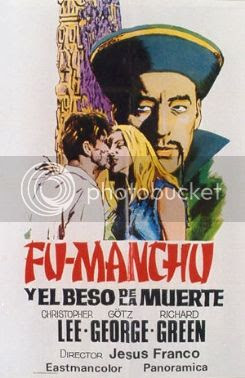 Holy racial stereotypes, this plot is complicated! The evil Fu Manchu (played by Christopher Lee) has kidnapped a group of lovely ladies in order to carry out his plan. What is his plan? To master the world, of course! Fu Manchu and his daughter, Lin Tang (Tsai Chin), use the bodies of these fine ass bitches to be vessels for a terrible poison, delivered upon his enemies with their kisses. 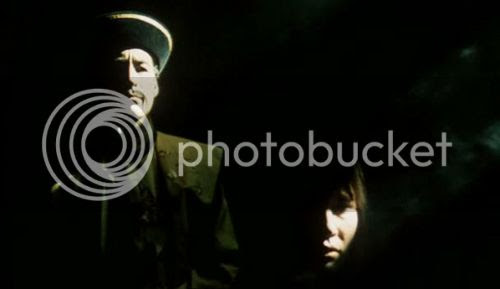 Meanwhile, an archeologist named Carl Jansen (Gotz George) is determined to find the lost city of Whateverthefuck where Fu Manchu now calls his secret hideout. He and fellow archeologist Dr. Wagner are attacked by Fu Manchu’s minions and the doctor is killed. When Jansen attempts to meet up with Ursula Wagner (Maria Rohm), the niece of the dead doc, he gets arrested for his partner’s murder.

Double meanwhile, in London, Nayland Smith (Richard Greene) is one of Fu Manchu’s intended victims. One of his women, Celeste (Loni von Friedl), kisses poor Nayland but he doesn’t immediately drop dead as intended, he just goes blind. Knowing he only has a short time left before the poison kills him, Nayland intends to find Fu Manchu and stop his evil plan. 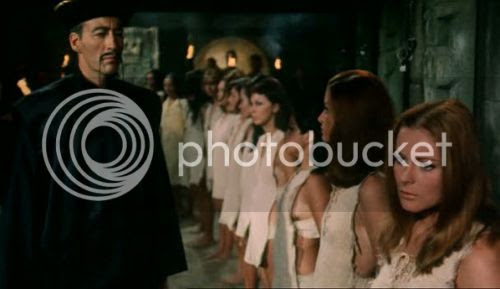 Making things even more difficult for poor old Fu Manchu is a bandit named Sancho Lopez (Ricardo Palacios) who likes to steal his supplies. One of Fu Manchu’s ladies shows up to the town where Lopez is raping and pillaging. She begins to dance in a "sensuous manner". Her target is Lopez but before she can deliver the death kiss, the bandito psycho shoots her. Since that plan was a magnificent failure, Lin Tang and a small gang of Fu’s soldiers raid the town and kill everyone except Lopez. Wha? They torture Lopez until he agrees to work for Fu Manchu.

Because he’s such a good chess player, the charges against Jansen are dropped. He meets up with Urusula and tells her about her uncle. They decide to travel back to where they were ambushed and they meet up with Nayland on the road. Now it’s a race against time or something because when the moon is full, Nayland will die and Fu Manchu’s plan will be complete. You see, he intends to kill millions with an airborne version of the poison if the world does not bow to him. Holy shit, I still have half an hour of movie left. 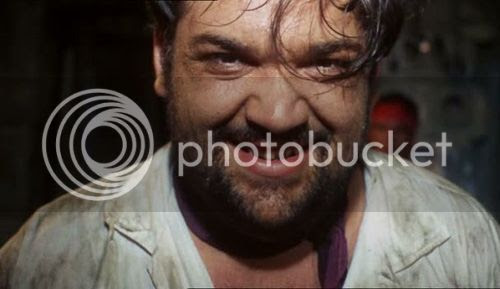 Did the world really need more Fu Manchu in 1968? Did Maria Rohm really have to dress like a dang Boy Scout? I have absolutely zero interest in the Fu Manchu character but I thought I’d give this flick a go. Christopher Lee’s voice (as usual) is amazing. Every line he speaks is friggin’ quote worthy: “The moon is full, the moon of life, let her taste the kiss… of death.” The only person in the cast who even comes close to stealing his fire is Tsai Chin. She is awesomely evil and I’m actually more afraid of her than Fu. It’s because she’s a woman and women are scary!

The cinematography and editing are both great plus there some decent action (let me emphasize the word “decent”), half-naked beautiful women in chains, and gong-banging! The plot definitely starts to meander after the first hour. The writers just keep throwing more and more confusing shit at the viewer but they eventually run out of steam. The film has a decent score from Daniel White, there's lots of Jess Franco-isms that you might dig, and the rest of the cast is pretty fun. In the end, The Blood of Fu Manchu is kind of drab but pretty okay and I am sort of glad I watched it.

“They tell me you can dance. Tonight, you will dance for the last time.”